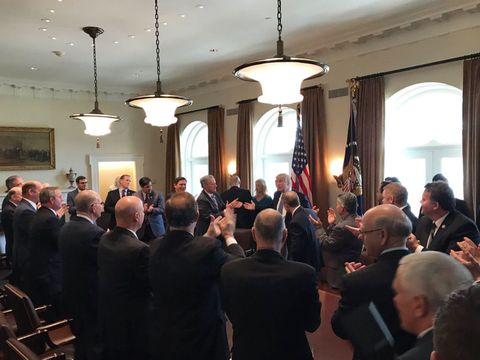 President Trump and Paul Ryan have been busy meeting with their fellow Republicans to talk about the GOP's Obamacare replacement bill—a bill that, if passed, would mean insurance providers no longer have to cover pregnancy, maternity and newborn care, and prescription drugs, to name a few essential health benefits.

So, who gets invited to these special meetings in which the future of our country's healthcare is determined?

Well, thanks to Cliff Sims, special assistant to the POTUS, we now have an idea. Sims snapped this picture during Trump's meeting with the Freedom Caucus, a group of conservative Republican congressmen, who apparently gave the President a standing ovation when he walked in.

Take a good look. We have a few questions.

1. Where are the women? Aside from Kellyanne Conway, there were no conservative women present for a gravely important meeting in which congressmen made decisions about women's healthcare, maternity care, mammograms, birth control availability, and access to abortion. Oh, and about Planned Parenthood. Not one chick!

Count on Samantha Bee to pick up on this omission.

Delaying the health care vote today to try to figure out what a woman is. pic.twitter.com/ezu5p4r40A

2. That standing ovation paints a misleading picture. The Freedom Caucus is actually one of the reasons why Trumpcare might not pass. The group thinks the bill is too similar to Obamacare. "We have not gotten enough of our members to get to yes at this point," said caucus chairman Mark Meadows.

Kaitlin Menza Kaitlin Menza is a freelance features writer.
Advertisement - Continue Reading Below
More From Politics
Everything We Know About Senator Warren's Husband
Mayor Pete's Husband Would Be a "First Gentleman"
Advertisement - Continue Reading Below
How a Parkland Mom Turned Her Grief into Action
He Voted for Trump. She Voted for Bernie.
How Guerrilla Feminists Are Fighting Femicide
Who Was Mayor Pete's Father, Joseph Buttigieg?
Nancy Pelosi, Icon, Ripped Up Trump's SOTU Address
Thoughts From a First-Time Caucus-Goer
And Now, a Word From the Future Voters of Iowa
Ayanna Pressley Wants Total Justice for Survivors