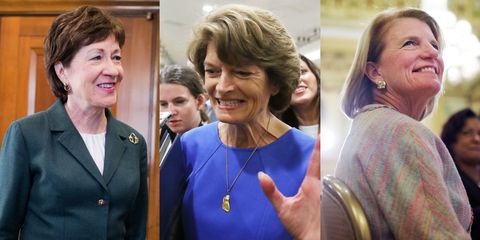 • Three GOP senators, Susan Collins, Shelley Moore Capito, and Lisa Murkowski, said they would not vote for a straight repeal of Obamacare without a replacement.

• This deals a death blow to Majority Leader Mitch McConnell's last-ditch plan after he couldn't get enough votes for the Senate's health-care bill.

• It just so happens that those three senators were shut out of the Senate's initial working group on health care. Go figure.

The original working group for the Senate's new health care bill, which failed to get enough votes, was made up entirely of men. But it was three Republican women who finally brought it down.

In a head-spinning series of developments, rank-and-file Republican senators turned on Senate Majority Leader Mitch McConnell and President Donald Trump for the third time in a row, denying the votes to move forward with a plan for a straight-up repeal of the Affordable Care Act, also known as "Obamacare." Sens. Susan Collins of Maine, Lisa Murkowski of Alaska, and Shelley Moore Capito of West Virginia delivered the death blow.

All had been shut out of McConnell's initial all-male working group on health care. Vox points out that the working group had 13 men, though they did invite Capito to talk about Medicaid, which affects her constituents in West Virginia. Collins established her own working group in response, even extending invites to Democrats.

"I did not come to Washington to hurt people," Capito said in a statement. "I cannot vote to repeal Obamacare without a replacement plan that addresses my concerns and the needs of West Virginians." West Virginia is one of the states suffering most severely from the opioid epidemic, making healthcare funding is especially crucial.

MORE: I will only vote to proceed to repeal legislation if I am confident there is a replacement plan that addresses my concerns.

"Repealing the ACA without a clear path forward just creates confusion and greater uncertainty," Murkowski said in a statement. Alaska has extremely high medical costs because many residents live in remote areas, and it also benefits from Obama's expansion of Medicaid coverage. Murkowski has been wary of anything that would jeopardize federal funds for her state.

My recent statement on the Senate Healthcare Process: pic.twitter.com/j19Ok1KwWw

"I do not think that it's constructive to repeal a law that is so interwoven within our health care system without having a replacement plan in place," Collins added in her own statement. "We can't just hope that we will pass a replacement within the next two years."

I will vote no on the motion to proceed to repeal the Affordable Care Act without a replacement. I voted against this same proposal in 2015. pic.twitter.com/Szuke5zYNL

The social media reaction was swift, especially from the left:

Poetic: the worst bill for women's health in a generation - written without women - is now failing without women. https://t.co/wKRUxrILvr

Perhaps if Senator McConnell had included women in the Senate on health care committee, he would not have lost collins, murkowski, & capito.

Now we know why 13 GOP men wrote the bill in the dark.

McConnell, who could afford to lose only two votes in the narrowly divided Senate, had turned to the repeal-only bill after his earlier repeal-and-replace measure was rejected on Monday. That had followed the failure of an earlier version of the bill last month.

The successive defeats made clear that despite seven years of promises to repeal former President Barack Obama's Affordable Care Act, Republicans cannot deliver. Nonetheless, McConnell insisted he would move forward with a vote on his measure to repeal the law, effective in two years, with a promise to work—along with Democrats—to replace it in the meantime.

The vote could come as soon as Wednesday. It appears doomed to fail, but GOP leaders want to put lawmakers on record on the issue and move on. As for Trump, he told reporters he'd like to "let Obamacare fail, it will be a lot easier."