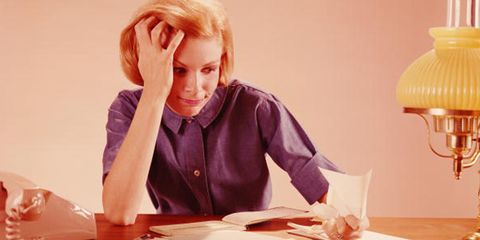 Last June, my boyfriend of four years and I got married. I didn't spend too much time lingering over the myriad choices that go into planning a wedding, or what to do about my last name.

Making the decision to keep my own was easy: I casually asked my then-fiancé one night if he had strong feelings either way. When he said that he didn't care at all, I shrugged off the idea of changing it and—mistakenly—thought the matter was settled.

The thing people don't tell you about keeping your last name is that you will, for the rest of your life, be fighting a low-level battle against tradition. Before we even got married, people assumed I'd be taking my husband's name. Cards started arriving a month out from our wedding date addressed to Mr. and Mrs., all of them very kind and very appreciated. But I couldn't get over the immediate gut reaction that screamed, "That's not my name!"

"The thing people don't tell you is that you will, for the rest of your life, be fighting a low-level battle against tradition. "

Being a strong, independent feminist is easy in theory, or if you live in an echo chamber of liberalism. I do not hail from such a glorious utopia, though. As much as I try to buck social norms that have been ingrained in me since birth—be pretty, quiet, nice, and accommodating—figuring out the line between standing up for what I believe in and avoiding confrontation has never been simple. And it's that dilemma that plays itself out in my fraught brain whenever someone gets my last name wrong. Although I know wanting people to use my actual, legal name is reasonable, that little voice in the back of my head always whispers, "But are you kind of overreacting?"

I've spent my entire life being called the wrong name. I was the only Bridget in my school district and one of only a few Heings in my entire county, an already distinct identity that I decided to take up a notch when I started using Bridey (an Irish nickname no one I meet has ever heard of). Honestly, at this point, I've been called Brid-lee so many times, I'm not totally sure that it's not the correct pronunciation.

But a lifetime of smiling and saying "Actually, it's Br-eye-dee" did not prepare me for the minor existential crisis brought on by people calling me by my husband's name.

Perhaps nothing sums up my conflicted emotions like a recent discovery in my latest college alumni magazine. While flipping through the pages, I was surprised to see my own name in a totally unexpected class note about my wedding. And I was even more surprised when the note went on to refer to me by my husband's name, despite the fact that no other publication—anywhere—has ever referred to me that way.

After yelling, "Casual sexism!" several times in a phone call to my younger sister, I was left wondering what exactly I should do. Send in a clarification? Subtweet the university? Let it slide?

By the time my husband got home, I was seething. This one class note became the emotional repository of almost a year of people assuming my last name had changed, despite all evidence to the contrary. Faced with my Cersei Lannister levels of fury, my husband shrugged and said, "It's not a bad name."

"that little voice in the back of my head always whispers, 'But are you kind of overreacting?'"

I'm aware that no one is being malicious when they get my last name wrong; it's just an assumption rooted in a cultural norm that I threw off the back of my broomstick as I flew to my Angry Feminist Coven meeting one night. And yet, that assumption says a lot, still, about how we view women's autonomy within relationships. (And yet, I understand that assumption so intimately—most women where I grew up do change their names when they marry.)

But when faced with a holiday card addressed to Mr. and Mrs. rather than Mr. and Ms., I'm faced with the question of whether sending a "Thanks, but …" in response is worth the embarrassment on both ends of the exchange.

If I'm honest, I usually settle on doing nothing. Why? Because as any woman knows, nothing is more offensive than being a pest—or so we're told.