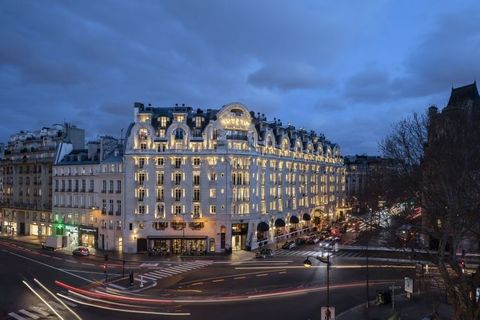 Part of the appeal of visiting Europe is the continent's history: Walk the streets of almost any European city and you'll see centuries-old landmarks nestled among modern buildings and 21st century architecture. It's that history rich setting mixed with the chic, je ne sais quoi of Europe's buzziest cities that makes a trip across the pond so appealing to American tourists.

The Set Hotels understand this better than anyone: Hotel Café Royal in London, the Lutetia in Paris, and the Conservatorium in Amsterdam—the group's three grand hotels—all take care to nod to their historic legacies while incorporating modern luxury into their present day identities. Below, read more about the noteworthy pasts of each of these three gorgeous spots:

Set in the heart of St. Germain on the Left Bank, the Lutetia has quite a history. Originally opened in 1910 with the aim of supporting the far-traveling suppliers of the neighboring Le Bon Marché (the beloved department store, which, rather dangerously, is still just meters away), the Lutetia also entertained and housed a host of famous clientele. Picasso and Matisse both took up residence there, and James Joyce penned "Ulysses" during his stay. American transplant Earnest Hemingway was another regular, as was dancer, singer, and activist Josephine Baker, for whom the Lutetia's newly reopened Bar Josephine is named.

The iconic spot has also seen many changes in its tenure. During World War II, the hotel was requisitioned by the occupation forces to house troops and officers. Then in 1944, at the orders of General de Gaulle, the Lutetia became a haven for families looking to be reunited, welcoming up to 2,000 arrivals each day. In the 1950s, the Lutetia readily celebrated France's post-war freedom and attitude, leaning into the Jazz Age and once again embracing its legacy as the venue for artistic collaboration.

Today, the hotel is all about celebrating its historic beginnings in a modern way. After four years of renovations, the Lutetia reopened in 2018 with renewed life. "The Lutetia is an extraordinary, legendary site. To revive its splendour and make it a 21st Century hotel that meets the criteria of ‘The Set,’ the Art Déco and Art Nouveau architectural elements from the past will be blended with contemporary design,” architect Jean-Michel Wilmotte says of the renovation.

Located on Regent Street in London, Hotel Café Royal has been the epicenter of chic since it was first founded in the 19th century. Launched by Daniel Nicholas Thévenon and his wife Celestine, the hotel and its original owners have quite the intriguing history: The wine merchant actually relocated to England as a means of escaping his creditors in Paris in 1863. Thévenon conceived the idea for Café Royal, and within a few years, had established a spot that would become a destination for the worldiest of clients, celebrities, and even royalty. To this day, Café Royal is known for having one of the best selections of wine in the world.

Oscar Wilde, Arthur Conan Doyle, H. G. Wells, George Bernard Shaw, Rudyard Kipling, William Butler Yeats, and Virginia Woolf are among the notable writers who frequented Café Royal and Winston Churchill is another formidable figure who was often seen at "The Café." Brigitte Bardot, Louis Armstrong and Muhammad Ali all visited the spot, and Café Royal was even the setting for a date night for Hollywood royalty Elizabeth Taylor and Richard Burton. The landmark had fans in the British royal family as well: Edward VIII (who infamously abdicated the throne in December of 1936 to marry Mrs. Simpson) and the late Princess Diana both enjoyed lunch at the hotel.

Housed in Amsterdam's museum quarter, The Conservatorium has lived many lives. Originally designed by the Dutch architect Daniel Knuttel, the space was first home to the Rijkspostspaarbank when the building site was purchased in 1897. After a series of mergers that prompted a move, the building was eventually vacated in 1978, and stood empty until newly formed Sweelinck Conservatorium moved in five years later. The space was renovated to accommodate acoustic classrooms required by the musical institutes that occupied the building.

The Conservatorium of Amsterdam eventually outgrew the setting and, like it's predecessor, had to move on from the historic spot in 2008. The same year, The Set Hotels purchased the space and commissioned Milan-based designer Piero Lissoni to transform the building with its rich past into the hotel it is today.

One look at the hotel rooms is enough to appreciate the marriage of modern luxury and historic architecture at The Conservatorium.

Learn more about The Conservatorium here.

Sally Holmes Editor in Chief Sally is the Editor in Chief of Marie Claire where she oversees coverage of all the things the Marie Claire reader wants to know about, including politics, beauty, fashion, and celebs.
This content is created and maintained by a third party, and imported onto this page to help users provide their email addresses. You may be able to find more information about this and similar content at piano.io
Advertisement - Continue Reading Below
More From Travel
Add St. Lucia to Your Post-COVID Bucket List
What to Buy From Away's Second-Ever Sale
Advertisement - Continue Reading Below
Explore the Luxe Private Island of Cayo Espanto
Andros Is the Most Underrated Spot in the Bahamas
The Most Covetable Weekender Bags Out There
Intl. Resorts That Offer On-Site COVID-19 Testing
Magical Ski Destinations for a Safe Winter Getaway
No Clue Where to Go in Turks & Caicos? Start Here
I'm Afraid to Travel by Myself in My Own Country
Over Cabo? Head to Punta de Mita, Mexico, Instead