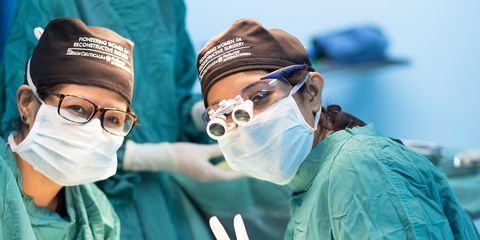 In an operating room of Kirtipur Hospital in Kathmandu, Nepal, reconstructive surgeons Dr. Farzana Bilquis Ibrahim and Dr. Pramila Shakya lean over the tiny hand of their patient, a one-year-old girl whose finger was crushed in a car door. As the two women discuss how to repair the injury, a male colleague interjects to suggest they remove the girl’s fingernail to assess the damage beneath. Dr. Ibrahim looks up. “She’s a girl, yes? Let’s give her a chance to keep her nail,” she says, before outlining a plan to save it.

The decision may seem inconsequential, but in Nepal, a patriarchal and primarily Hindu society—where many people believe physical imperfections are a sign of karmic misdeeds in a past life, and a woman’s value is often based on her ability to marry and produce sons—it could have far-reaching consequences. This little girl lucked out.

A Nepali mother and child at Kirtipur Hospital.
courtesy of Skinceuticals

Unfortunately, in low-income countries like Nepal, there are typically only three female surgeons for every 1 million people, so it’s rare to find a woman in command of an operating room. But SkinCeuticals is trying to improve those numbers. The L’Oréal-owned company has partnered with ReSurge International, a nonprofit that trains and supports reconstructive surgeons and provides surgical care to those in need, to create Pioneering Women in Reconstructive Surgery. 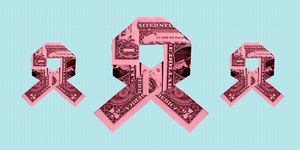 I Took Down a Fraudulent Breast Cancer Charity 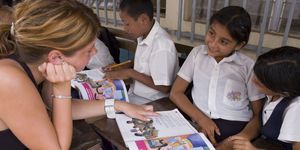 6 Actually Impactful Ways to Give Back

The goal is to help female surgeons in developing countries succeed in their careers and pave the way for more women to join their ranks. Dr. Ibrahim, who is from Bangladesh, and Dr. Shakya, of Nepal, are members of the program’s inaugural class, which includes four other surgeons, from Mozambique, Zimbabwe, and Ecuador.

“I don’t think of myself as a pioneer,” says Dr. Shakya after the surgery. “But I’m beginning to understand I have a responsibility: If other women see me succeed as a surgeon, they might be inspired to do the same.”

And the more female surgeons there are, the better off women will be. Dr. Ibrahim has seen this firsthand. She chose to specialize in surgery in part because she realized the lack of female surgeons was a public health issue. Years earlier, she met a literature professor who had a breast tumor but was so ashamed to show it to a man that she had let it grow until it was at an advanced stage, putting her life at risk. “At the time, there were scarcely any female surgeons for her to go to,” says Dr. Ibrahim. “The more women there are in surgery, the more women we can help.”

Dr. Ibrahim consults with a patient.
courtesy of Skinceuticals

Thomas Reedman, an assistant vice president of global marketing and product development for SkinCeuticals, says this is why his company decided to develop the program. “These women are already skilled surgeons, but we want to help them become leaders and mentors,” he explains. “The idea is that they’ll identify younger surgeons to be part of the program next year, and so on.”

Eventually, SkinCeuticals hopes to pair women who are still in medical school with mentors, and give them support and training that will make them more likely to go into reconstructive surgery, one of the most rigorous specialties.

Even if the program simply inspires more women to continue their education—regardless of the field they choose—it will be a success. Data from a World Bank study shows that a 1 percent increase in the proportion of women with a secondary education can increase a country’s per capita income growth 0.3 percent. When women rise, we all rise.

Donate to Pioneering Women in Reconstructive Surgery or support the cause by purchasing any SkinCeuticals product. Our pick? C E Ferulic, a serum that delivers environmental protection, brightens skin, improves firmness, and reduces the appearance of wrinkles.

Jennifer G. Sullivan Jennifer Goldstein is the former beauty & health director of Marie Claire and co-host of the award-winning beauty podcast Fat Mascara.
This content is created and maintained by a third party, and imported onto this page to help users provide their email addresses. You may be able to find more information about this and similar content at piano.io
Advertisement - Continue Reading Below
More From Trending Beauty
I Tested Meghan Markle's Top Beauty Products
Glitter Pumpkin Butts Are a Thing for Halloween
Advertisement - Continue Reading Below
Behold: The Self-Tanner Fail to End All Fails
This Is Pinterest's #1 Halloween Makeup Idea
These 3 Products Cured This Woman's Acne
Princess Eugenie Just Dyed Her Hair Bright Red
13,000 People Swear By This Eye Cream
Post Malone Cut His Hair and Looks Unrecognizable
Shay Mitchell Will Only Use This One Concealer
People Are Freaking Out About Emma Stone's Hair