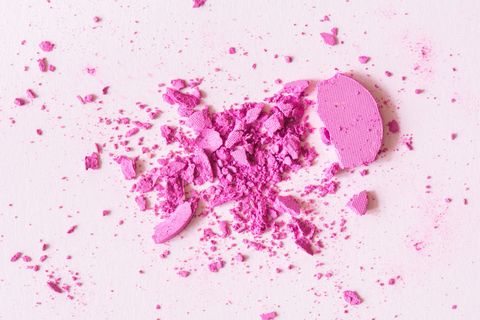 I once had a boyfriend who was an expert in fueling my insecurities. He'd accuse me of cheating on him just because I took "so long" primping before going out—with him.

I would find myself rattling off excuses in an effort to buy myself more time: "I need to get some laundry done," or "I have to run some errands for my dad before you pick me up." The truth is, I was probably in my bathroom whitening my teeth or frantically covering my entire body with self-tanner—*also* in an effort to look good for him. I was doing whatever (I thought) it took to get that coveted look of approval.

"We need to get you to the tanning bed. You're too hot to go around in public looking that pale."

"We need to get you to the tanning bed. You're too hot to go around in public looking that pale," he'd say. There was also: "Did you drink last night? You look bloated." Oh, and let us not forget: "You need a different mascara. Your eyes are too pretty to look like spiders." The more he insulted me, the harder I strived for his acceptance. The harder I tried, the more I resented never being "enough."

Eventually I got sick of his obsession with managing my appearance—I broke up with him. Still, I internalized those ideas and allowed them to take root. His words stuck with me for a long time, often finding me again when I actually felt good about what was looking back at me in the mirror.

The author
Courtesy of Lacey Johnson

For far too long afterwards, I sought worthiness in my appearance. Every glance or compliment from a stranger infused me with a momentary dose of euphoria. But every time someone didn't respond to my new outfit or haircut the way I hoped they would, I hit a new low.

An archetypal "girly girl," I had always relished in celebrating my femininity with makeup and fashion. But after this toxic relationship, I began to dread (and resent) the process. I often stood in front of my mirror feeling as though I was signing myself up for failure over and over again each day, because I never seemed to gain my own approval.

But the way I looked at beauty began to morph when I took a job as a regional makeup artist for a well-known cosmetic company. Suddenly, I was given a front-row glimpse at other people's routines. I recognized in these women the same insecurities and perpetual "striving" mentality I also struggled with.

I was painting the faces of girls and women aged 12 to 92–women who held titles ranging from babysitter to Federal Judge. Almost every single one of them was invested in ways to improve her appearance.

Something about seeing this insecurity reflected back to me in my client's faces triggered an immense realization: I was never going to find value in others' approval of my physical appearance because my value does not exist there. No one's value exists there. I'm the only one who can give myself that value.

Slowly, I began working on releasing myself from the pressures of physical perfection.

The way I viewed makeup began to change too. No longer a laborious effort, primping has become a means of celebrating myself. Makeup has become a pleasure again. I don't do it because I'm trying to become more valuable—I'm valuable already.