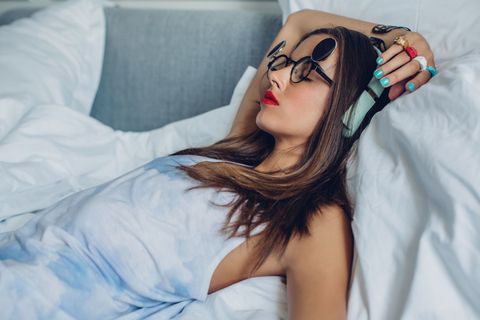 "I read that NBA players keep their bedrooms at 68 degrees, so I crack the window before I sleep," I stage-whispered, hoping the next table over would submit it to Overheard New York. "It's like we do the same job, pretty much." This can be said of abstaining from screens, spritzing your (silk) pillowcase with lavender, and downing a chamomile tisane, even though that's just asking for 68 trips to the toilet, which is more disruptive than anything.

These are the rituals we perform before we rest, because everybody is chronically tireder than Hillary Clinton ought to be right now, if Hillary Clinton were not an Übermensch who had the energy to trek through the woods days after the election. Maybe it's Breitbart keeping you up at night. Maybe it's that blockhead Keith in accounting. But we know the truth—it's your face.

Who amongst us hasn't laid on her back with every intention of staying there? Well, in answer, who wants to be able to wedge a black American Express Centurion Card in her nasolabial folds? That we usually wake up on our sides is cause enough for tossing and turning—except with this trick, you will be properly immobilized. (Don't worry—it's chic.)

After massaging in a dollop of Tula Hand & Nail Therapy, put in some big earrings. Not shoulder-dusters, mind you—this is the only instance in which one would not wish to emulate Beyoncé—but studs or more compact shapes substantial enough for you to be conscious of their presence. Nothing too bejeweled, either. (Wouldn't want to snag your Olivia von Halle cashmere tracksuit.) The least annoying options come with flat closures, says Adrian Castillo, body piercer at New York Adorned.

"Most standard jewelry has butterfly backs, which poke people when they're sleeping," he says. "Wear something comfortable and lightweight."

And don't even think about attempting this if you've had a recent run-in with a professional piercing establishment's well-sanitized needle—Cassi Lopez, also of New York Adorned, says you risk irritating the puncture site, which could prolong recovery time. "Excessive pressure from sleeping on a fresh piercing can eventually cause a straight piercing to angle downward, particularly when the initial piercing length is left in the ear."

(Otherwise, sleeping on a completely healed hole is perfectly all right.)

So the Mega Earring might be out of the question for p.m. wear, but thanks to their more manageable brethren, in the daytime, the face between them will be all the more crease-free.