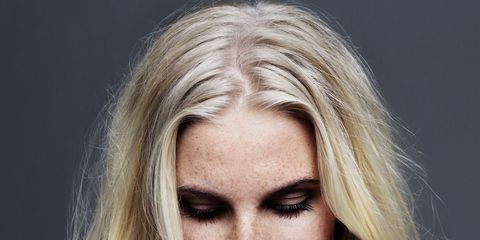 Considering that we live in a culture where 33-year-old Kate Middleton is splashed on the cover of magazines simply for letting her silvery roots show, it's fair to say going gray can be a sensitive subject—particularly in our youth-obsessed culture. For most, the first signs of gray don't come until you're in your thirties or forties, but for others, it's much earlier than that. While there's no denying a silver 'do seems to have more trend appeal than ever—Lady Gaga and Kat Moss have both rocked the hue—we'd rather not have silvery strands too early on. Here's what you need to know:

The Science Behind the Grays

Hair goes gray when pigment-producing cells stop releasing melanin, which gives it color. Unfortunately, going gray prematurely is in large part genetic or could be the result of an autoimmune condition. An inconveinent rule of thumb: If your parents went gray at a younger age, chances are you will too. According to a recent study, ethnicity also plays are role. Caucasians tend to go gray sooner than other races, including African Americans and Asians.

How to Keep the Grays at Bay

The good news is that going gray isn't completely out of your control—your lifestyle can play a significant role. For one, there's stress, which is something that millennials know all too well. A 2013 study found that melanin-producing cells can disappear when exposed to stress hormones. While it's not going to cause you to go gray all at once, it does seem to contribute to the problem, so find opportunities to de-stress as much as possible.

Your diet, too, can play a consequential role in graying hair. Low vitamin B12 and B-9 levels (more likely for vegans), as well as copper and iron deficiencies, have been known to cause a loss of hair pigment. To amp up your nutrition, and potentially prevent premature grays in the process, look to a balanced diet rich in antioxidants with foods like salmon, green leafy vegetables, and nuts. Bonus: They'll also give you glowing skin.

Lastly, a 2013 study found a link between smoking and going grey in your twenties. As if you needed another reason to quit...

You're Doing It Wrong: 7 Ways to Use Your Hair Products Like a Pro

Everything You Need to Know About Hair Contouring

The Power of the Silk Pillowcase: Real or Fake?

Lauren Valenti Associate Web Editor I’m the associate web editor at Marie Claire.
This content is created and maintained by a third party, and imported onto this page to help users provide their email addresses. You may be able to find more information about this and similar content at piano.io
Advertisement - Continue Reading Below
More From Beauty
How to Tighten and Firm Your Neck Area
The Blue Shampoos Brunettes Will Love
Advertisement - Continue Reading Below
What to Buy From Sephora's Spring Savings Event
Snuggling Gives Kristen Bell a Great Sense of Calm
The Ultimate Guide to the DIY Pedicure You Deserve
Jen Batchelor Schedules Self-Care on Her Calendar
Face Masks That Double as Acne Treatments
Behold, Your Skin Type Cheat Sheet
Created for From Marie Claire for Created by Marie Claire for
Neutrogena
Sunscreens That Won't Leave a Cast on Dark Skin
At-Home Laser Hair Removal Devices That Work