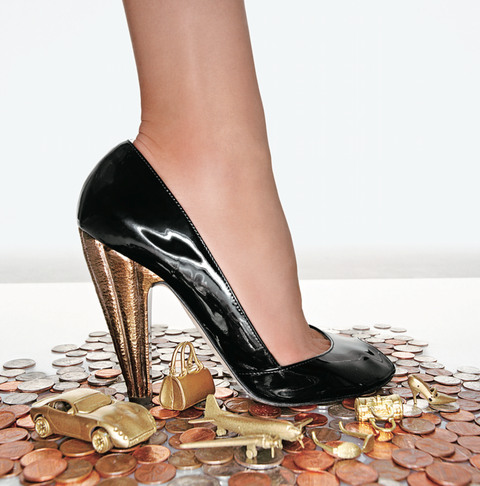 There's an episode of Sex and the City where, after a breakup and discovering she has spent $40,000 on Manolo Blahniks, Carrie Bradshaw finds herself in financial trouble. When she starts discussing her monetary woes with her friends, Charlotte gets squeamish. "People are funny about money," Samantha says.

This situation is not uncommon among women. In fact, it's the norm; and it sucks. Women are known to share almost every personal detail with their peers—when they have their period, the fight they had with their significant other/parent/sibling/friend, even what they ate that day. But when it comes to money, there's far less sharing than there should be.

It is a known statistic that women make significantly less money then men in the workplace. In fact, we don't have a chance of catching up until 2096—2096!! So why, then, are women so uncomfortable discussing their salaries with friends and peers? When it comes to negotiating funds, whether it be an annual income or how much you should gift at a wedding, wouldn't it be more logical (and helpful) to be aware of what we're all earning in order to make the best judgment yourself?

"Let's face it: We will share the number on our bathroom scale before the number on our pay stub," says Nicole Lapin, financial expert and author of Rich Bitch, who is also a strong advocate of women being more vocal about their finances. "We have to be communicative to declare our value. It's important to keep a pulse on what other people in your industry are making, and make sure you're being appropriately compensated for your skills."

So how do we change the perception of money as a taboo subject? And how do we get friends and peers to open up? According to Lapin, it's all about your approach. Rather than ask directly, which can make people uncomfortable, don't immediately target their salary. "Tell your friend or colleague that you are interested to know more about the various benefits of her career, including what a typical person in her position makes," suggests Lapin. "She'll be more likely to divulge if she can speak to the position in general, and you might learn a thing or two about how to get there."

So let's start by initiating a conversation about finances with female peers. Because without helping each other first, how can we possibly begin to change everything else?