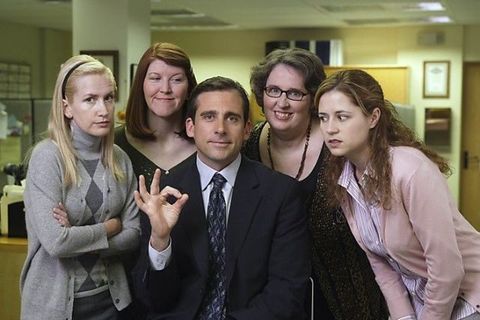 Want to make yourself look better at work? Team up with some female coworkers. New research suggests that groups made up of mostly women perform better whether they collaborate face-to-face or online.

In the study, researchers randomly assigned 272 participants to four-person teams tasked with a bunch of collaborative, timed assignments involving skills you use at work, like brainstorming, choice-making, coordination, memory, pattern detection, information gathering, and so on. The point was to assess collective group intelligence and effectiveness.

Some of the groups met in person, and some only worked together online. Researchers tracked how much each individual contributed and tallied the number of words each group exchanged.

Researchers also assessed individuals' emotional intelligence (i.e., the ability to assess others' feelings) by showing them photos of strangers' eyes and asking them about the mental states of the people pictured. Then, researchers combined all the data to calculate group averages and identify ways to predict group effectiveness.

They found some fascinating patterns: First off, people in the smartest groups participated equally and communicated a lot (which makes perfect sense).

Interestingly, the smartest groups were mostly female and had the greatest emotional intelligence overall, regardless of whether members worked together face-to-face (and used facial cues to apply their emotional intelligence) or online (where there were no visual cues). In other words: Emotionally intelligent teams were smarter, even if they couldn't fully put that particular skill to use. Researchers think emotionally intelligent people probably have a bunch of other skills that make them especially effective workers. So if you're empathetic, you're good working from home.

You can also use this info to stack the deck in your favor when you choose your own team at work. Coworkers (male or female) who recognize your feelings (i.e., they can tell when you're having a bad day) could make better teammates than those who are entirely aloof. If you can't get a good read, you might want to partner with a woman FTW.

Why Women Find It Harder to Say No to Extra Work

The 14 Biggest Career Mistakes Women Make in Their 20s

Elizabeth Narins Senior fitness and health editor Elizabeth Narins is a Brooklyn, NY-based writer and a former senior editor at Cosmopolitan.com, where she wrote about fitness, health, and more.
Advertisement - Continue Reading Below
More From Money & Career
Women Are Allowed to Be Mean Bosses, Too
The Couple Who Made an App to Control Finances
Couples + Money
Advertisement - Continue Reading Below
The Right Questions to Ask on a Job Interview
Brie Larson Gave Me the Best Career Advice
Payal Kadakia Raised $1Billion—While Pregnant
Birchbox Boot Camp
The Couple With a Hugely Successful Finance Blog
Couples + Money
Dating When You're $120,000 In Debt
How to Lead a Big Meeting With Confidence
The Couple Who Paid Off 21 Credit Cards
Couples + Money