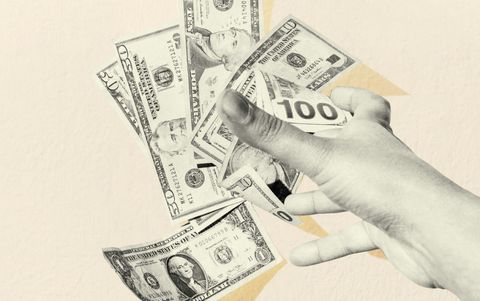 It's impossible to ignore the blaring cultural message: Women are bad at negotiating. We use the wrong words, orthe wrong tone. We don't have the right role models. We don't get the same positive reactions as men do. And ultimately, it's our fault we don't make more money because we don't do a good job of asking for it. There's enough negative cacophony out there to drown out even the most empowering Beyoncé lyrics.

the real problem isn't that women aren't good at negotiating—it's that we just don't recognize it.

But according to negotiation consultant Lelia Gowland, who specializes in helping women achieve career success on their own terms, you're actually great at getting what you want. The real problem, she says, isn't that women aren't good at negotiating—it's that we just don't recognize it. You're actually successfully negotiating constantly throughout the day, from making dinner plans to arranging a weekend with friends. "We should be looking at negotiation like that: not as an obstacle course that there's only one right way to complete, but as an organic conversation."

Here, Gowland's best tips for slaying your next work-related deal:

1. Replace the Word "Negotiation" with "Conversation"

"A negotiation is just discussion aimed at reaching an agreement," says Gowland. Eliminate the word "negotiation" from your vocabulary, and you'll be surprise how much more confident you feel. Gowland cites a study by Linda Babcock from her book Women Don't Ask: When told to pick metaphors for negotiations, men picked things like "winning a ballgame," while women picked things like "going to the dentist." Guess who got the results they wanted.

Sure it feels weird to talk to yourself in the mirror or role-play your situation with a friend, but you just have to suck it up and rehearse. Gowland recommends reflecting before your meeting on what you want, and then how you want to get there. She says practice can be a game-changer—it gives you the opportunity to play around with approaches until you find what feels best for you. Don't be afraid, for example, to reframe common scripts into something new. Ask yourself, "how do I want to say this?" "What feels comfortable in my own voice?"

Whether you're negotiating a raise or advocating for changes to your work culture, Gowland recommends framing your argument from your employer's perspective. You don't have to lose sight of your goal and what's important to you—get what you want by approaching the situation in terms of how it benefits your employer. For example, if you're asking for a more flexible schedule, provide examples of how it will make you more productive and effective for them. "Another helpful strategy is to recognize the ways that your employer likes to receive information," says Gowland. "Some swear by numbers, while others might prefer a narrative. Whatever it might be, make your request using that language."

Sometimes this means going outside your friends or coworkers and joining a network—either virtually or in person—with similar goals and mindsets. It's all about finding a group that motivates you. And these days, you can network without even leaving your desk. Gowland created what she calls a "goal-setting circle" of women who gather to reflect and set strategic benchmarks on what they wanted to accomplish for the next 12 months. "Whether it's through a goal-setting circle or an informal group of friends, strive to cultivate that network of people who are 'believers' and are invested in you," says Gowland. Depending on your area of expertise, there's also private Facebook groups and Slack channels that can provide a similar support and advice network. And don't forget to read up on the best ways to hire—and retain—women.

Marie Elizabeth Oliver is the managing editor of Power To Fly, a career network for women in tech. Check them out if you're looking for great tech-related job opps, inspiring women to learn from, or an impressive pool of candidates to hire.