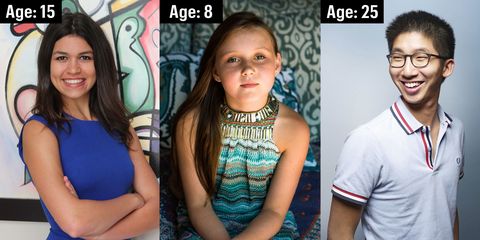 The bios of entrepreneurs like Steve Jobs and Walt Disney display an unquestionably ambitious spark from an early age, enough to make you wonder what genius could be brewing in the minds of today's youth. Every generation brings a handful of these wunderkinds who see more from their young lives than homework and curfews; they naturally glimpse opportunities and solutions in between learning how to tie their shoes and drive a car—and then actually put those ideas to work.

The point is not to make you feel like a slacker. These impressive stories can also serve as an amazing kick in the butt. Because if they can create a multi-million dollar company before the prom, what can you do next?

Kavovit dreamed up a liquid bandage that resembles finger paint on the skin, and appeared on Shark Tank to promote her invention at age 6. The bright colors are both fun to apply and environmentally friendly—a half-ounce bottle is the equivalent of 75 sticky band-aids.

2 of 11
Sebastian Martinez, 8, CEO for apparel company Are You Kidding?

The name of this company is appropriate, given that it's tough to believe that a third grader could have designed these adorable, cartoon-printed socks. With his 10-year-old brother Brandon (left) serving as director of sales, the family is even devoted to giving back, with several designs benefitting causes such as autism and ALS.

3 of 11
Alina Morse, 10, inventor and founder of Zollipops

Eat too much candy and your dentist will be mad, right? Morse didn't like that idea, so she set out to create a lollipop that was sugar-free and actually helped freshen breath. Thus Zollipops were born, a candy made with xylitol that also balances oral pH.

4 of 11
Rachel Zietz, 15, founder and CEO of Gladiator Lacrosse

As a middle-school lacrosse player, Zietz was disappointed in the quality and pricing of equipment on the market. Not interested in a vanity project, her approach to Gladiator Lacrosse is hands-on; she's involved with every step of research and production on the line of nets, goals, and clothing.

5 of 11
Maddie Robinson, 18, founder and designer at Fish Flops

Growing up near the beach, Robinson loved doodling sea creatures and imagined applying her drawings to clothing. Her adorable fish-covered flip-flops were snapped up by Nordstrom and she nabbed over $1 million in sales by age 15.

After taking her younger sister shopping for bras, then-high schooler Grassell was creeped out by the sexualized options, inspiring her to launch a line of comfortable (and still cute) bras for tweens and teens.

Despite astounding medical advancements over the last century, maternal health is still a crisis in many developing countries. Nagar created a wearable technology—specifically, a necklace—that allows doctors to scan for a patient's medical history, focusing particularly on mothers and their young children.

Kids today and their phones, right? Dallas leveraged his success as a viral Vine star into a paid conference where teens can meet their social-media idols. He is now expanding his reach into Hollywood, with a movie in 2015 and a Netflix series in development.

At 18, Agarwal started building a platform to aggregate and assist with booking standard hotel rooms across India. Four years later, he is running the largest budget hospitality chain in a country of 1.2 billion people.

In a tumultuous global economy, coding might be one of the securest vocations out there. That's why Cheng created a software-development academy for promising kids in East Africa, where her students are already enjoying a 95% hiring rate after graduation.

Said to be the youngest person ever to receive venture-capital funding, Wong created an advertising platform that leverages accomplishments on mobile-gaming apps to benefit the player, advertisers, and the game developers. His company has raised over $15 million to date. 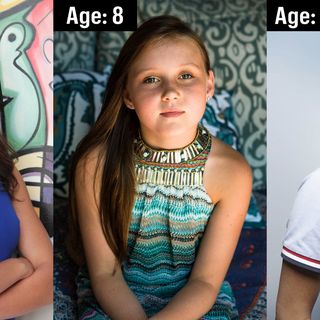