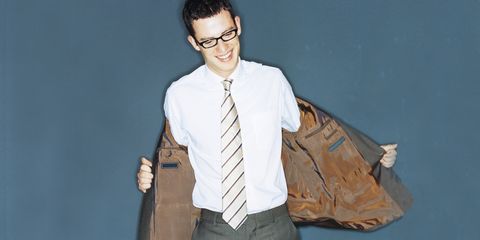 Uber CFO Brent Callinicos announced on Monday that he's stepping down to spend more time with his family. His resignation comes just one week after Google CFO Patrick Pichette announced his early retirement via Google+, including his immediate plans to travel the world with his wife. Pichette made mention of the "frenetic pace" of his job and how he's "always on even when I was not supposed to be."

When MongoDB CEO Max Schireson announced his resignation seven months ago, he wrote about his plans in a blog entry entitled "Why I Am Leaving the Best Job I Ever Had." Schireson candidly shared moments he'd missed, including the "family puppy being hit by a car" and "emergency surgeries with his son." He acknowledged a double standard and difference in expectations male and female CEOs contend with in regards to work-life balance.

These resignations from male tech executives suggest they want in. They want to attend their kids' soccer games and share hallmark family moments. They want to respect and appreciate their spouses by being present.

These resignations from male tech executives suggest they want in.

A 2011 paper written by the Families and Work Institute (FWI) called "The New Male Mystique" posits C-suite males are embattled by the classic "work-family conflict": an imbalance that results when more hours are spent working than home in a given week. The study surveyed 1,298 married men who were employed in a salary or wage job.

Sixty percent of respondents reported they were experiencing work-family conflicts.

FWI president Ellen Galinsky said the study revealed a more vulnerable side of male executives who contend with some of the same challenges and pressures as their female counterpart.

"[The study] gave them permission to talk about it. It feels to them that they have it not as hard as women do, yet they struggle with the same issues," she said. "They too are challenged balancing extensive work-related traveling with parenting. They fear backlash from their families for having missed pivotal moments."

In an interview with Time, Intuit CEO Brad Smith said one of his biggest regrets was leaving his wife and newborn daughters (now 17 and 19) the day after they were born for work-related travel. "My daughters are the reason I do everything," Smith said. "But there are so many moments in hindsight I would have gone back and done differently."

5 Work Habits That Could Be Ruining Your Career

This content is created and maintained by a third party, and imported onto this page to help users provide their email addresses. You may be able to find more information about this and similar content at piano.io
Advertisement - Continue Reading Below
More From Money & Career
Renee Montgomery on Becoming Co-Owner of the Dream
5 Financial Lessons the Pandemic Taught Us
Advertisement - Continue Reading Below
Yes, You Can Afford to Live Alone. Here's How
When WFH Becomes a Never-Ending Nightmare
How to Nail a Zoom Interview
VP Harris Chats With NASA Astronauts—in Space
Sallie Krawcheck: What Equal Pay Day Gets Wrong
Is Nextdoor Curing Loneliness?
Five Short Docu Films You Need To Watch
#2MillionMentorMinutes Wants to Help Women