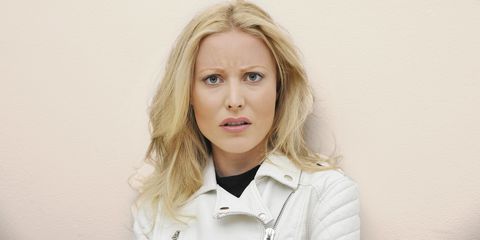 Not that this is something that should preoccupy your thoughts, but…someone probably finds your voice annoying—especially if you're a young woman. For a while now, New York Times features and old-fogey NPR hosts and movies (hey, In a World) have been obsessed with telling us how dumb we sound because we flutter our vocal chords or end sentences like questions or use "like" way too often. But how about this: Is it so wrong if (nearly) everyone I work/live/interact with does it too?

Originally, everyone who writes for this website was supposed to join me in having his/her speech problems diagnosed by a professional. It would have been a medium-/medium-low-fun bonding exercise, but they all chickened out, which is how I ended up making unnatural, Fran Drescher-like noises in a 100 percent not-soundproof room located less than five feet away from my boss's boss's boss's desk. By myself.

It's cool, though, because after a session with John West, head instructor and co-owner of New York Speech Coaching, I now know I don't sound completely stupid, have a "very pleasant tone quality," and am in possession of a fun, laid-back, affable energy. Ha! No diplomatically worded compliments for you, suckers.

Because you haven't left me in the lurch like those other people, I'm letting you in on my voice issues plus some of the most common problems West sees in his clients.

Too legit to commit

According to West, I talk with a fair amount of vocal fry—that low, creaky, vibrating, very pop-culturally relevant noise your vocal chords make when they flutter. (Yay! I'm a trendsetter!) It's most common at the end of sentences because we run out of air, so to show what a difference paying a little extra attention to your exhale can do, he had me say "Now is the time for all good men to come to the aid of their country," then count to five right after "country." The vocal fry began when I got to "four," but West assured me that phrase is much longer than any we'd say IRL—the point is, see the end coming, and send more air as if you'd have to count to three or four afterward. Or, think about blowing out candles as you reach the final words of the sentence.

This ain't yoga class, but if you, like me, deal with random pauses or "ums" and "uhs," you might also want to be more deliberate in your speech. It's that easy: Have the words in your mind before you say them. And if you need to buy yourself time to think, wait during those moments of punctuation. (You know, where a period or a question mark would be if you were writing out your words.) For practice, read out loud—linking the words until you get to a period or comma and taking a big breath before you start again.

This is how you stop uptalking?

Uptalking is when you make every sentence sound like a question. So how do you combat this? Simple. Try saying five sentences in a row with downspeak—AKA making sure the pitch goes down—to familiarize yourself with how it feels. "I crossed the street today." "I took my dog with me." "I went to the grocery after that." For every day situations, be very conscious the first sentence or "thesis" of your answer always goes down—that's the most common time people use upspeak, which undermines the strength of your argument.

"Shrill" and "piercing" aren't exactly adjectives you'd want associated with your...anything, so change how your mouth moves. Look in a mirror or film yourself with your phone, and say the vowels like you're at the dentist—you want to see space between the back of the tongue and the uvula. If you don't see a gap, you're holding your tongue too high when you talk, which pushes air into the head, giving your voice a nasal quality. Similarly, most people hold tension in their jaws/keep their teeth together, which also affects voice quality because the air can't get through. Think of a string pulling your mouth open or taking a bite out of an apple.

You don't have to be an expert like West to be able to hear when someone's nervous or anxious. So chill—mentally and physically. That's how I got to have such a great voice (minus the vocal fry and the awkward silences when I don't say anything because I'm too busy thinking about what I'm going to eat next).

12 Ways to Sound Smarter and Stronger At Work

13 Words That Undermine Your Authority And Your Intelligence