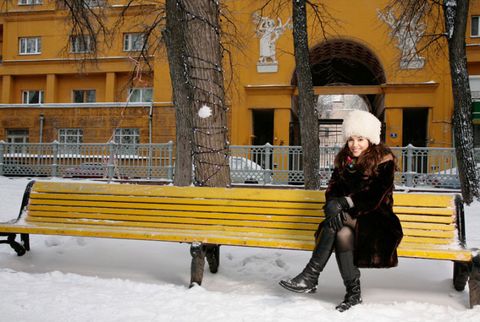 Why I wanted to live in Russia: I'm always looking for a front-row seat to exciting, news-making events. So when my company, Reuters, gave me the opportunity to transfer to Moscow three years ago, I jumped at the chance. Now I cover human rights and the North Caucasus--the patchwork of Muslim regions along Russia's south, including Chechnya and Dagestan, where an Islamist insurgency is raging.

Biggest surprise: I've become a vodka drinker. It's great when frozen and served alongside pickled garlic.

Crazy adventure: I once went to the Chernobyl nuclear power plant in Ukraine to report on a new lid for the reactor that exploded in 1986, as it was still spewing dangerous particles into the air. All around, the bushes and grass were a shocking color of bright green. Officials told me I would be protected from contamination if I drank a glass of sickly sweet red wine. At one point, in the nearby town of Pripyat, I heard a colossal bang from inside a building. My tour guide said it was probably a "radioactive wolf" wandering around, as the area was crawling with contaminated animals. Turns out, it was a drunken security guard--he stumbled out of the building, his pants down around his ankles.

Greatest challenge: It's hard to get officials in the male-oriented North Caucasus to take me seriously. The last time I was in Dagestan, the first deputy prime minister interrupted me during an interview, saying, "Why are you asking me these questions? Let's get trashed on cognac!" A few minutes later, his minions arrived with red roses for me, and he proposed marriage.

What I love about living here: On your birthday, everyone you know hands you a bouquet of flowers.

Biggest disappointment: Dating. Russian men can be major drinkers and womanizers. They also have an unfortunate fondness for long, pointed black shoes that make them look like elves.

What I miss about home: Mexican food, Target, and customer service. I once found a cockroach garnishing my pasta at a restaurant in Moscow. The staff did not apologize. I made the mistake of saying that in the States, the meal would be free. They said, "Well, go back there!"

How the experience has changed me: Living in a country with subzero temperatures can be trying, but at least the heating works.

How you can get here: Check out the job ads in the Moscow Times online or come with a global news service, such as Reuters, Dow Jones Newswires, or Bloomberg.

Why I wanted to live in China: After college, I got an internship in public affairs at General Motors — I thought it would be a great opportunity, especially since my parents had taught me to speak Chinese. Five years later, I'm still in Beijing, but on a different career path. After traveling the country and snapping photos along the way, I've become a freelance photographer, handling photo assignments for various companies, as well as exhibiting my work.

Biggest surprise: How fast things change in Beijing. Every time I return from traveling, something is different on my street. The last time I came back from a monthlong trip, a whole new building had appeared out of nowhere.

Greatest challenge: Massive gridlock. The other day, I took a cab to meet some friends for dinner in Beijing. The ride should have taken about five minutes. It took 40.

Major mishap: Once, when I was at a bar with some expat friends, a waiter mistook me for a local. He said he wanted to charge my "foreign" friends a higher price for drinks. If I went along with it, he told me, he would split the profits with me. I passed on the arrangement, but maybe this can be a contingency plan if my photography career goes south!

What I love about living here: Riding around on "ice chairs." They're tiny stools that you can sit on to slide across frozen lakes, thanks to blades on the bottom.

Biggest disappointment: I have not found a single restaurant that makes General Tso's chicken.

What I miss about home: Clean air and big blue skies. While the pollution in Beijing can make for some fantastically eerie photos, it's not cool when you step outside and can see all the microparticles you're breathing in.

How the experience has changed me: I've learned to be more patient. For instance, I don't lose it anymore if someone hawks a loogie right next to me on a crowded sidewalk.

How you can get here: Look for job listings and networking events on thebeijinger.com and cityweekend.com.

Why I wanted to live in Brazil: I grew up dreaming of seeing the world, probably because my mom is Brazilian and my dad is English. I came to Rio de Janeiro at 25 to do some fieldwork for my doctorate in city planning. When I visited Rio's favelas, or shanty-towns, I found people struggling to improve their lives, with zero support. I turned my dissertation into an active project, launching a non-profit called Catalytic Communities, which helps train people in low-income communities to make use of computer technologies, such as networking forums and social media, in order to strengthen commerce and communication. I've been here ever since.

Greatest challenge: Settling in and making friends. You're a total outsider until you prove yourself. You might as well be from Mars. In fact, in an international survey, Brazil is listed dead last when it comes to matters of "trust." I've made friends over the years by keeping promises, calling people, and always being there when needed.

Major mishap:Early in my career here, I was invited to speak at a school about my work. I kept my presentation short and sweet, priding myself on respective everyone's valuable time. So, after 10 minutes of speechifying, I opened up the floor to questions. No one said a single word, and I slunk out of the building, embarrassed and confused. I later learned that my presentation was considered rude because it was so brief — the audience assumed I thought my time was too valuable for them!

What I love about living here: Rio is the most beautiful city on earth: stunning mountains and beaches, tropical forests, amazing panoramas everywhere you look.

Biggest disappointment: Local politics. I'd like to see more efforts towards finding creative solutions for poverty.

What I miss about home: Christmas in the cold. Halloween and Thanksgiving. Fireplaces. Almond butter.

How the experience has changed me: There's a real lack of social norms in Rio — people pretty much do what they please. It's a very "live and let live" city. For instance, I never get a "poor thing" reaction when people find out I'm a divorced single mom. This has helped me feel free to live my life as I choose, without worrying about what anyone else thinks.

How you can get there: Volunteer with Catalytic Communities or come with another non-profit — you can find opportunities at idealist.org. Or look for job listings in the Rio Times online.

Why I wanted to live in India: After working in New York City for a few years, I needed a change of scenery. I applied for a job as a design consultant with one of India's largest garment manufacturers, which makes clothes for Gap and Nike. A couple of years later, I met and married my husband, Tarun, who is from Mumbai. Together, we started our own business, a small manufacturing company in Mumbai. I also design my own clothing line called The Divine Life of Ryley, which I sell at Anthropologie, Big Drop, and other U.S. stores, as well as in India.

Crazy adventure: I once took a trip through Rajasthan in northern India with friends, which meant taking several overnight trains. Imagine sleeping on a hard slab of a bed, your head bouncing around due to the bumpy tracks, soot blowing in your face through open windows, and a toilet that's a hole in the floor, straight through to the train tracks. When you arrive at your destination, all discombobulated, you hop on a bicycle rickshaw and try to hold onto your luggage.

Greatest challenge: That would be my stomach. I had food poisoning nine times in the first year. I was always on the lookout for usable bathrooms. Now, after four years, I have a stomach of steel.

Major mishap: One day my landlord randomly decided she wanted to boot my husband and me from our apartment. She probably wanted to rent it to someone else and charge more money. But we had signed a lease, so we weren't budging. She decided to go to the police and essentially accuse my Indian husband of running a prostitution ring involving white women. We had to go to the police station repeatedly to defend ourselves. Finally, when we forked over some cash to help the officers understand our side of the story, we won.

What I love about living here: The rich colors, textures, tastes.

How the experience has changed me: Growing up in America, I got used to round-the-clock convenience. After a few years of intermittent Internet service--and intermittent everything service--in India, I realize how lucky I've been in life.

Why I wanted to live in India: The country first captured my imagination when I was a kid, leafing through the glossy photos in National Geographic. I loved the jam-packed city streets and sweeping landscapes--such a crazy contrast. A couple of years ago, when my sister launched her own business in Mumbai, I came to help her get her company off the ground, then decided to stay. I got a full-time job as a graphic designer at an advertising firm in Bangalore.

Biggest surprise: The staring. Everywhere I go, people stare at the blue-eyed foreigner. It's hilarious. Young boys like to snap pictures and pretend they didn't. At the Taj Mahal, entire families lined up to take pictures with me.

Major mishap: Once, when I was shopping for a sari to wear to a friend's wedding, I decided to try on another kind of outfit, called a lehenga, a jewel-covered halter top and low-waisted skirt. But when I asked the boys working in the store if I could see a lehenga, I mispronounced the word, saying "linga." The boys all turned red and completely avoided eye contact with me. "Do you have any?" I pressed. "I want to see!" I learned later that "linga" means "phallus."

What I love about living here: All the hand-painted posters, signs, and funky typography. I post my favorite examples on my site, kayleighryley.com.

How the experience has changed me: I've learned to negotiate. In India, practically everything you buy--a carpet, a trinket, a rickshaw ride — involves serious bargaining.

How you can get here: Join an India expat group on Facebook, MySpace, or Meetup. Or try monsterindia.com.

Abigail Pesta Abigail Pesta is an award-winning journalist who has lived and worked around the world, from London to Hong Kong.
Advertisement - Continue Reading Below
More From Money & Career
Birchbox Boot Camp
The Couple With a Hugely Successful Finance Blog
Couples + Money
Advertisement - Continue Reading Below
Dating When You're $120,000 In Debt
How to Lead a Big Meeting With Confidence
The Couple Who Paid Off 21 Credit Cards
Couples + Money
How to Handle Being the Breadwinner
I Started a Company to Pay My Medical Bills
Shan-Lyn Ma Is Here to Save Your Wedding
These Mantras From Powerful Women Are So Inspiring
Created for From Marie Claire for Created by Marie Claire for
Stitch Fix
The Couple Who Paid Off $114K of Debt in Two Years
Couples + Money