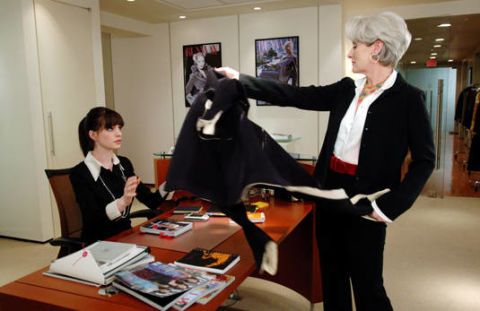 I'd been working my butt off for one particular company for close to three years when a senior editor position opened up. Naturally, I jumped at the opportunity (#leanin #career #momoney) and immediately fired off an email to my boss. "Hi Mandy, I see that the position to backfill Alex's old job finally opened up. Since he left over four months ago, I've been handling a majority of his workload in addition to mine, and have not only been able to meet all deadlines, but have also helped increase numbers. I'd love to be considered for the opportunity." Sweet. I thought for sure I was going to get it.

Concurrently, Jack—the other associate editor on staff—had also emailed our boss asking to be considered for the same position. My boss replied to me later that afternoon and said, "While I think you are doing a great job, I'm not sure if you're quite ready for that role."

WTF?! I'd not only been doing most of that position's workload, but I was kicking-ass at it to boot. I needed to reply, but didn't want to send an email fueled by emotion rather than facts. So, I went home and called my dad. My dad is the most logical person I know. Sometimes, and especially during high emotional crises, he's really annoying—all I want him to do is side with me and tell me that I'm right. However, when it comes to staying calm, looking over the facts, and constructing a brilliant reply, he's the man. I told him everything that happened, and in true dad format he said "Make a list and identify what you've been doing compared to what the position is asking for," to which I replied a handful of expletives, exhausted at his "tried and true" lists. "Deanne," he said, "this will help you formulate what you've been doing, what's expected in the new position, and how you measure up." Sigh. He was right…as usual. So I sat on the phone with him for the next hour talking through all the stuff I'd worked so hard on that year. How I diligently rose to take on additional projects, how I succeeded at them, and how I was helping the company's bottom line.

The next morning, I went into work prepped to send my reply. I waited. Three hours. Finally, I saw a reply from my manager that read, "I really appreciate all that you've done, which is a lot, and while I don't think you're quite ready for that role, I will give you an opportunity to interview for it." Well, that was all I could ask for, right?

So I did. I went in with numbers, facts, passion—everything I could muster to ace the interview. And so did Jack.

A week went by and we both hadn't heard anything. Things at work had gotten awkward because both Jack and I knew we were vying for the same position and the person who didn't get it would likely leave. Then it happened: We were both called in to the president of our division's office.

"You both have done exceptional jobs," our fearless leader said, "and we are at a loss for which one of you is best for the role. So, we are asking each of you for a follow up, to be turned in tomorrow morning, no less than a 1000 words, on what you were like as a teenager." I should probably mention that I worked for a site that catered to young adults. No problem, I thought. I was a rebellious teen with loads of anecdotes to share. I had already started writing the piece in my head on my drive home. Then I realized: Jack was likely going to do the exact same thing. How was I going to stand out? What could I do different?

I spent my days interviewing celebs, experts, philanthropic teens for editorial pieces for our site. Those stories always performed so well. It was a genius, yet risky idea, but I didn't want to turn in the same 1000-word essay on the same boring stuff. So, that's what I'd do: I'd interview all of my close friends, my parents, and my sister to share how they viewed me as a teenager.

It worked. A few days later, my manager asked me to join her in our president's office. "Congratulations!" she said. "We've decided to promote you to senior editor. We thought how you took on a last-minute assignment was not only courageous but imaginative." From the initial email where my boss thought I wasn't ready for the role to this. I could hear my inner-feminist cheering—I was standing up for myself and my career, and #winning.

A few days later Jack quit, but he congratulated me and said he heard how I landed the role. "Smart thinking," he said. Damn straight, that's the only way I roll.


The Absolute Worst Way to Quit Your Job


How to Land a Job in Fashion

Photo Courtesy of Fox 2000 Pictures; names have been changed to protect those involved