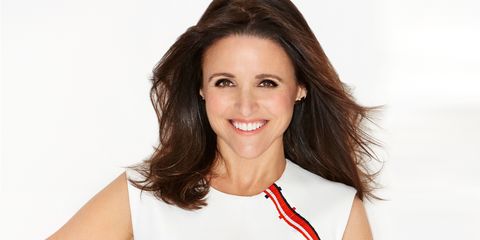 This interview originally appeared in the May 2015 issue of Marie Claire.

Opportunities for bold, buzzy roles in TV comedies do not come around often, particularly not to '90s-era sitcom stars on the wrong side of 50. And yet here she is, Julia Louis-Dreyfus, at 54—nearly two decades after leaving her iconic role on Seinfeld—starring in HBO's acclaimed Veep.

Both shows feature shrewd, darkly funny portrayals of complex, frustrated, and opinionated women who really, if we're being honest, could only be played by Louis-Dreyfus, an actress gifted at making even the most bitter and shallow characters seem charming and vulnerable—while making us laugh, too.

"Unlikable characters can be very relatable," she says, sipping a cappuccino at Freds, the restaurant atop Barneys New York in Beverly Hills. "I don't think we're all so likable all the time. I include myself in that, and I don't consider myself to be a bad person. Likability is—I don't know what the hell that means. It's just a bunch of bullshit."

On why she cut her hair for Veep: "I mean, Hillary Clinton has gotten so much shit for her hairstyles over the years. Which is remarkable when you consider what it is she does! But hair, for some reason, is a really big deal."

On female politicians: "In my limited experience, I would say that female politicians can be a bit more forthcoming, open. I don't mean they're spilling the beans or saying things they shouldn't, but I don't feel a guard in the same way. Maybe it's a female-to-female thing."

On her longevity: "I've followed my instinct. I've tried to be as thoughtful as I could be and pure in my thinking in terms of looking at projects and, by the way, the people who are attached to those projects. It's kind of like getting married to a stranger: You spend a lot of time together, and you have to be in sync creatively—and you can't always know that. For instance, with Armando, I didn't really know him that well, or at all, actually. And then you sign your life away."

On her Veep character: "I play a character who's a straddler. Her ideology is, 'I am a political animal, and I will get reelected at all costs.'"

This interview appears in the May 2015 issue of Marie Claire.

This content is created and maintained by a third party, and imported onto this page to help users provide their email addresses. You may be able to find more information about this and similar content at piano.io
Advertisement - Continue Reading Below
More From The Emmys 2021
I'm Obsessed With the Ted Lasso Cast at the Emmys
Kathryn Hahn Is Dressed to Perfection
Advertisement - Continue Reading Below
The Best Red Carpet Looks at the 2021 Emmys
The Best Reactions to Zendaya's Emmy Win
Zendaya Wore Two Stunning Outfits for Emmys Night
The 2020 Emmys Had a Confusing Vibe
Tracee Ellis Ross Is a Queen in This Gold Dress
'Schitt's Creek' Swept the 2020 Emmys
Regina King Wore a Breonna Taylor Shirt to Emmys
The Best Celebrity Instagrams From The 2020 Emmys