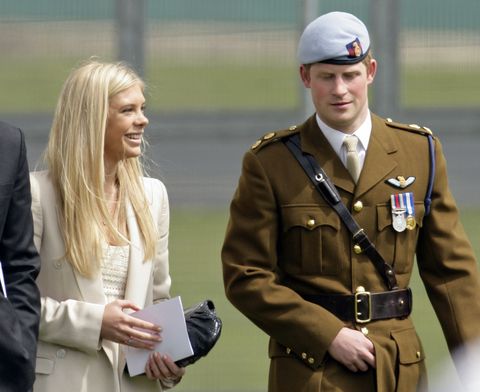 Before he met and fell in love with Meghan Markle (pause for swoons), Prince Harry had quite a few girlfriends—the most serious of which were Chelsy Davy and Cressida Bonas. Both Davy and Bonas run in the same social circles as Harry, so you might be wondering if they'll score invites to the royal wedding. And the answer appears to be yes and no, in that order.

Harry and Davy in the rain in 2006.
Getty Images

Us Weekly reports that while Bonas likely won't get an invite, Davy is expected to attend. "Don’t expect to see Cressida invited—the two didn’t remain friends—but do not be surprised if Chelsy shows up with a date," a source tells the magazine. "The two have remained friends long after ending their relationship and still keep in touch to this day."

Harry and Davy in 2007 with Prince William.
Getty Images

Apparently, Davy "congratulated [Harry] the minute the engagement news was announced" and "Meghan would have no problem with her being there." As of now, it appears as though Harry's ex is "on the preliminary list of friends to invite."

Harry dated Davy from about 2005 to 2010, and she even opened up about their relationship, saying, "It was so full-on: crazy, and scary, and uncomfortable. I found it very difficult when it was bad. I couldn't cope. I think we will always be good friends."

Mehera Bonner Contributor Mehera Bonner is a news writer who focuses on celebrities and royals.
This content is created and maintained by a third party, and imported onto this page to help users provide their email addresses. You may be able to find more information about this and similar content at piano.io
Advertisement - Continue Reading Below
More From Celebrity
Meghan Markle Looked Gorgeous at Global Citizen
Harry and Meghan Are Taping Their NYC Trip
Advertisement - Continue Reading Below
Keep an Eye on Lady Louise Windsor
Princess Beatrice's Daughter May Get a Royal Title
James Middleton’s Wife Thought He Was a Waiter
Meghan Markle Got a New Nickname
Harry Said the Queen and Philip Were "Adorable"
Kate Middleton Played Tennis With Emma Raducanu
Tom Felton Collapsed on a Golf Course
Ashley Olsen Made a Rare Red Carpet Appearance