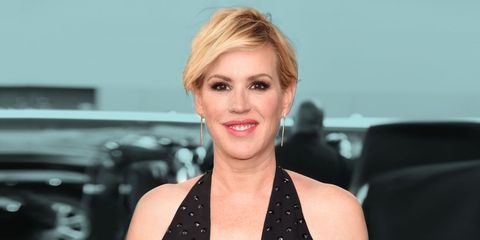 First you appeared. I don't remember exactly when. You weren't there during my childhood. And then one day while looking in the mirror, I saw you.

Staring at myself was a habit I acquired as a teenager. Though it's commonly attributed to narcissism, in my case it felt far more related to diffidence and worry. There is something about the reflex of looking for one's reflection that feels reassuring. The reflection says, I exist. Here's the proof. And for girls, that need is exponentially compounded by the question of beauty. Physical reassurance was something I craved as a teenager.

"Physical reassurance was something I craved as a teenager."

As a child, I was plain (my mother used the word cute—the death knell of a young girl's confidence). One summer, there were so many muddy freckles on my face, it looked as if I had a spectacularly uneven tan, like a face hastily colored in by a child whose hand got tired. I hated my freckles and did everything I could to eradicate them from existence. I applied lemon juice, bleaching cream, I even took sandpaper to them—the only technique that actually seemed to work. (This was finally put into practice by dermatologists. It's called dermabrasion and uses an instrument much finer than the 220-grit sandpaper that my mom used when she re-varnished our living room table—the same sandpaper that I sneaked into the bathroom to scrape a patch of freckles off the bridge of my nose until it bled. Fortunately, the only thing I disliked more than freckles was pain.)

Eventually, I gave up on eradicating my freckles and settled on simply preventing myself from getting any more. I did this by applying a lot of sunscreen, wearing heavy-duty foundation, and getting really into hats. In most of the films I made as a teen, I had very pale skin, in large part thanks to a L'Oréal foundation in "porcelain," which is about a half shade darker than Kabuki makeup. It did the trick. No one suspected the freckles underneath.

And then you showed up: not on my face—nothing could get through that armor of makeup—but on my chest. You were a perfectly shaped, dark-brown beauty mark prominently positioned on my right breast, just before the slope into my cleavage. Between the ages of 15 and 18, my body continued to develop. It went from gangly to voluptuous before I was ready. I still felt like a waif—my dresses were all vintage '20s shifts designed for slender flappers. But my body decided to change eras on me. At first, I covered up, wearing more layers, baggier clothes (this was the '80s, and granny fashion was not only accepted, but encouraged). Then along came the designer Azzedine Alaïa, and suddenly all the layers didn't seem as appealing. I started to wear tighter dresses and lower necklines. I was 19. That's when I noticed you.

You were perfect, totally round, not too big or raised or witchy, and mercifully devoid of any hair. You were sexy and flirtatious and irresistible. You were Marilyn Monroe. As soon as I was sure that you were there to stay—I spared you the sandpaper, but did scrub enough to make sure you weren't an ink stain—I took it as a sign. I had been marked. Knowing that you were there gave me a strange little boost of confidence when it came to seduction. I admit that I enjoyed watching eyes travel down to you and linger there for a moment. More than once would come the challenging (and usually drunken) query, "You draw that thing on?" I adored you the way one adores a kitten.

And why do we so viscerally love kittens and puppies and bunnies more than we love the animals they (or we women, for that matter) grow into? Rare is the person who prefers the beauty found in the layers, the strata that develop over years of persevering through life and all its complications. Why don't we feel the urge to kiss the stretch marks that formed over the bellies that held our babies? The smile lines. Or the scars that tell part of our story: This happened to me. I lived through that.

Who knows if you really were beautiful. Maybe you only were because I found you so. And then one day, you vanished as silently and curiously as you appeared. I may not have known when you first showed up, but when you went away, I was acutely aware. I had just broken up with a boyfriend and wasn't sleeping well at night. My two best friends would take shifts during the day, hanging out with me, attempting to distract me with projects. They took me to shooting ranges, car races; we even formed a Ulysses reading group. Then one day I was just so tired, I lay down outside in a tank top and shorts and fell asleep under the sun. No sunscreen, no hat. When I woke hours later, my skin was searing and blistered. The tops of my thighs, my forehead, the tips of my ears—anywhere the sun reached my skin, it scorched without pity. I applied aloe leaves and cream compresses to my chest, but the burning went on for days. When I took off the bandages, my skin peeled away in soggy sheets. Bright-pink new skin glowed underneath. Perfect, untouched, unfreckled, unmarked skin.

But you were gone.

It was as if you had never been there. If I didn't have photographic evidence, I'd have a hard time believing you were ever there at all.

"I like to imagine you were teaching me a lesson: Here is beauty, but don't get too attached. And that goes for all of it."

So why did you come? I'm sure there's a sound scientific theory on why moles appear and disappear, but I've never bothered to investigate. I like to imagine you were teaching me a lesson: Here is beauty, but don't get too attached. And that goes for all of it. One day, the same breasts whose arrival is first heralded with bewilderment, shyness, and excitement will grow and then shrink after babies. They'll become something else. Not bad, just different. Everything that's big will become smaller, and what we want to remain small will grow bigger. Even our ears will grow. Fingers will begin to become crooked from multiple injuries, and the arches in our feet will fall. Everything that we ever found beautiful about ourselves in the mirror, no matter how long we manage to delay it, will eventually go under the category of a "different kind of beauty." Every day I practice being OK with that.

An older woman I know offered me this metaphor. We are trees. When a tree is in its prime, it dazzles everyone with its delicate branches and glossy leaves and blossoms. But what truly matters, what makes the tree survive and interesting, are the strong and gnarled invisible roots underneath that are responsible for holding it up through all kinds of weather.

I know that if I wanted, I could tattoo you in the exact same spot, but really, what would be the point? You were beautiful while you lasted. But then you vanished to make room for something else.

This essay appears in the September issue of Marie Claire, on newsstands now.

This content is created and maintained by a third party, and imported onto this page to help users provide their email addresses. You may be able to find more information about this and similar content at piano.io
Advertisement - Continue Reading Below
More From Celebrity
What Happens on Katie's Season?
Gigi Shared the Sweetest Photo of Zayn and Khai
Advertisement - Continue Reading Below
Meghan Shared the Cutest Update About Archie
Meghan's Heartfelt Father's Day Gift for Harry
Sophie Turner Shared a Sweet Unseen Pregnancy Snap
The Queen Has a Collection of Dog Toys for Sale
Meghan Revealed the Nod to Diana in 'The Bench'
Celebs Are Posting Tons of Father's Day Tributes
Will Spent Father's Day with George and Charlotte
Charles Won't Allow Archie to Become a Prince