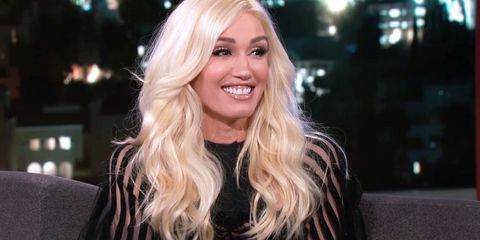 You know that feeling when you learn something about your S.O.'s ex and you think, "Well, that sounds a little crazy." And then you feel bad because maybe it's not crazy at all and you're just biased by the fact that the person in question used to love the person you love and that can be an emotional minefield? But THEN you tell that story about the maybe-crazy thing to an unbiased third party and they completely validate your reaction?

Well that convoluted but universal thing is just what happened to Gwen Stefani during a new interview on Jimmy Kimmel Live. Stefani stopped by the show to chat with Kimmel and, after some chit chat, the conversation took a turn for the kind-of creepy when the singer shared a story about one of Blake Shelton's exes:

"He did tell me that he dated a girl for, like, three months that had my face plastered over her whole bedroom," she said. "So that’s kind of weird, right?"

Kimmel agreed that it was, um, disconcerting, but he had a very...creative response to the story.

"That’s really weird. You know what you oughta do?" he said. "I hope Blake isn’t watching so you can surprise him. Find out what she looks like and plaster her face all over your room."

Stefani definitely won't be taking Kimmel's advice—she called the idea "gross," which, fair. You can watch the entire hilarious interview below:

Related Story
The Reawakening of Gwen Stefani
Kayleigh Roberts Contributor Kayleigh Roberts is the weekend editor at Marie Claire, covering celebrity and entertainment news, from actual royals like Kate Middleton and Meghan Markle to Hollywood royalty, like Katie Holmes and Chrissy Teigen.
Advertisement - Continue Reading Below
More From Celebrity
How Goop's Vagina Candle Came to Be
Kim and Kourtney Throw Punches in New 'KUWTK' Clip
Advertisement - Continue Reading Below
Selena Spent Weekend Helping Solve a Murder Case
JFK and Jackie Kennedy's First Year of Marriage
Kate and William Dress Up for Dear Evan Hansen
Kobe Gave His Vanessa a Dress From 'The Notebook'
Will There Be a 'Bachelor' Spin-Off for Seniors?
Beyoncé and J.Lo's Nail Art Tribute to Kobe
Demi Lovato's Gorgeous No Makeup Selfie
Kate Middleton’s Brother Is Making a Documentary