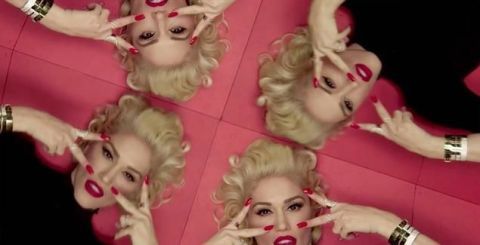 Gwen Stefani made history during Monday night's Grammy awards, creating the first-ever music video created on live television—a Target-sponsored one which aired during a four-minute commercial break. The epic video for "Make Me Like You" featured seven costume changes, more than 40 performers, and a crew of 250 people at a 32,000-foot soundstage in Burbank, California.

Stefani and her fellow salon-goers hold tabloids that read "Gwen Pregnant With Alien Baby," likely a reference to all the false rumors that have been circulating about her personal life lately. Her real hairstylist, Danilo Dixon, was in the video fixing her 'do, and her real stylists, Rob Zangardi and Mariel Haenn, helped out with costume changes throughout.

Then, later in the video, Gwen heads to a bar with a neon "Blake's" sign, which was modeled after boyfriend Blake Shelton's real handwriting, according to a press release. Shelton liked it so much that he apparently ran off with the prop after the shoot was over.

The performance went off without a hitch—well, except for that one roller-skating dancer who slipped and fell while on camera. Though it looked like Stefani, it was clearly a body double who was skating backwards while Gwen hit her mark for the next shot. Which she did, flawlessly.

According to Billboard, a rehearsal just before the main event didn't go as well, and Stefani had banged her head and worried everyone. But after handling it perfectly in real time, she reportedly collapsed into Shelton's arms offset, quoting a song lyric, "Thank God I found you." Cheesy, but adorable. Watch the full video below.

This content is created and maintained by a third party, and imported onto this page to help users provide their email addresses. You may be able to find more information about this and similar content at piano.io
Advertisement - Continue Reading Below
More From Music
Reese & Ryan's Son, Deacon, Drops His First Single
Life Advice From an Icon, Cher
Advertisement - Continue Reading Below
J.Lo Is Basically Naked on Her New Single Cover
Karaoke Songs Anyone (Yes, Anyone) Can Rock
Um, This Dude Claims Lady Gaga Stole “Shallow”
Sad Taylor Swift Is the Best Taylor Swift
Jennifer Lopez's NYC Concert Was Evacuated
Miley Cyrus Channels Britney Spears' Iconic Look
Ginger Spice Apologizes for Leaving Spice Girls
Fans Walked Out of the Spice Girl's Reunions Tour