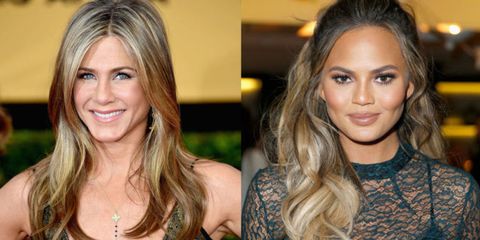 Yesterday, the internet and women everywhere applauded Jennifer Aniston for the epic Huffington Post essay she wrote lashing out at the tabloid media's portrayal of women. So it should come as a surprise to virtually no one that today, dependable internet troll Piers Morgan had something misogynistic to say about Aniston's piece—and Chrissy Teigen is having none of it.

Morgan wrote his own response to Aniston's essay on the Daily Mail, claiming that the actress shouldn't be writing about the objectification of women since she poses for photos that are airbrushed by magazines. Teigen, Queen of Twitter Comebacks, came to the actress' defense and publicly called out Morgan this morning for his comments.

"Saw your piece on Jennifer Aniston. Why do you ALWAYS take the road of being the piece of shit asshole?" Teigen tweeted at Morgan, starting a back-and-forth argument between the two.

Morning, Ms Teigen. You didn't actually read it did you...? Try doing that before throwing another diva tantrum. https://t.co/rxCHbLT2lH

Teigen then proceeded to put him fully on-blast, even thwarting Morgan's attempt to compliment her husband John Legend as a "genius."

Someone please grab a chair for Morgan to take a seat in; another Twitter win for Teigen in the books.

Lauren Alexis Fisher Lauren Alexis Fisher is the former market editor for HarpersBAZAAR.com.
This content is created and maintained by a third party, and imported onto this page to help users provide their email addresses. You may be able to find more information about this and similar content at piano.io
Advertisement - Continue Reading Below
More From Celebrity
See the Royals Socialize at a 1991 Cocktail Party
Eugenie's Pics from Inside Harry and Meghan's Home
Advertisement - Continue Reading Below
Queen Trolled Tourists Who Didn't Recognize Her
Blake and Ryan Recreated Their First Date on IG
Charles Expertly Ignored Boris Johnson's Snafu
How Kitty Spencer's Wedding Dress Honored Diana
Dolly Parton On the #FreeBritney Movement
Will & Kate Are Nervous About George's Future
George Won't Be Forced to Go to Boarding School
Diana Would Have Written a Memoir Too, Friend Says