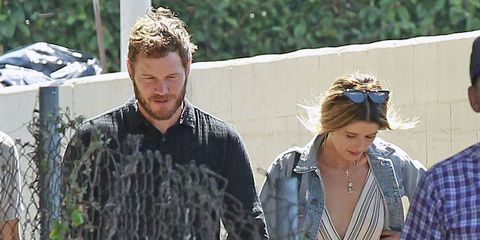 It's been almost a year to the day since the world mourned the separation of Chris Pratt and Anna Faris. In that year, a lot of healing has happened, if not for fans who still secretly ship the longtime couple then for the couple themselves. Faris has moved on with cinematographer Michael Barrett, and Pratt has reportedly started seeing Katherine Schwarzenegger.

Pratt and Schwarzenegger were first linked in June and have reportedly gotten more serious as the summer has progressed.

"They are spending every day together and Katherine has met Jack several times," a source close to the couple told People. "They seem to be getting more serious."

On Sunday, the getting-more-serious couple took things to a spiritual level, attending a church service together in Los Angeles. They were photographed leaving the service together and looking perfectly content and comfortable with each other.

Pratt wore dark jeans and a black, button-up shirt to the service.

Pratt and Faris announced their separation on August 6, 2017 in simultaneously released posts on Facebook and Instagram, respectively.

"Anna and I are sad to announce we are legally separating," Pratt wrote at the time. "We tried hard for a long time, and we're really disappointed. Our son has two parents who love him very much and for his sake we want to keep this situation as private as possible moving forward. We still have love for each other, will always cherish our time together and continue to have the deepest respect for one another."

Kayleigh Roberts Contributor Kayleigh Roberts is the weekend editor at Marie Claire, covering celebrity and entertainment news, from actual royals like Kate Middleton and Meghan Markle to Hollywood royalty, like Katie Holmes and Chrissy Teigen.
This content is created and maintained by a third party, and imported onto this page to help users provide their email addresses. You may be able to find more information about this and similar content at piano.io
Advertisement - Continue Reading Below
More From Celebrity
Every Detail We Know About J.Lo & A-Rod's Wedding
Bella Hadid Poses in a Slinky Sequinned Skirt
Advertisement - Continue Reading Below
Andra Day Stuns in a Gray Chanel Couture Gown
Emma Corrin Thanks Princess Diana at the Globes
The Sussexes Have Made a Huge Change to Archewell
Best Reactions to Jason Sudeikis' Globes Speech
Kaley Cuoco Wore a Princess Dress to Globes
Your First Look at Harry & Meghan's Oprah Special
Best Celebrity Instas from the 2021 Golden Globes
J.Lo Looks Impossibly Stunning In a White Swimsuit