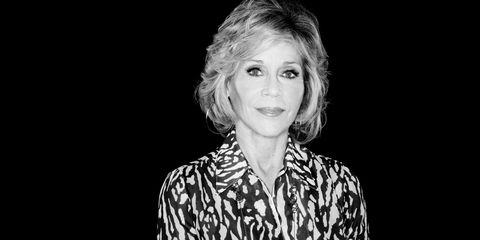 Wearing an immaculate brown coat and popping Jolly Ranchers, Jane Fonda inspects her arms for flea bites. (The previous weekend, she explains, she was visiting her grandchildren—and their dog—in Vermont.) The two-time Oscar winner and seven-time author is the subject of the latest film in AOL's MAKERS series, an oral and visual history of pioneering females. But for now, in the greenroom backstage, she seems less like an international icon than a busy woman who is miraculously radiant despite the possible presence of fleas.

At AOL's launch event, Fonda spoke exclusively with Marie Claire about gender equality, faking it 'til you make it, her split-second transformation from a theoretical to an actual feminist, and her love of Empire's empress, Cookie Lyons.

You mentioned House of Cards in your talk, and you have a new Netflix series with Lily Tomlin called Grace & Frankie (out May 8). What other TV shows do you watch?

"I've become obsessed with Empire. It's a game-changer. It's so robust and I love the costumes and the production values. I love the music, I love the songs. And most of all—and I also happen to love Terrence Howard—but I love Cookie, the female character. She's one of the great women characters on television now. She's just fantastic.

What I do is I tape it all, and then I fast-forward through the commercials. So I'll see three or four episodes at a time. I think it's extraordinary. I mean it's a soap opera but, why not? I want to be on Empire."

Who would you play on Empire?

Can I hear it?

You're an outspoken feminist. How do you think we fix sexism in society?

"We're not just struggling for women's equality when we talk about gender equality. We're also saying men are hurt along the way and men are a part of this whole struggle for humanity. Men's humanity is damaged by this toxic masculinity."

"I think sometimes women who attain a high level of authority feel like they have to behave like a man."

So we need to redefine the word "masculinity?"

"Yes, we have to help boys understand that they can also be tender just as women can also be strong; they can be emotional just like women can be resilient, that these are human qualities that men and women can share. Yes, men are different than women. In very beautiful ways and very profound ways. But the things that have been taken from men by the notion that they can't be emotional, that they can't be tender and empathetic and show sorrow are damaging to them, because it's not what they started out as."

Do you think we're ever going to have wage equality?

"I think eventually we will. It's definitely doable. But we have to fight for it."

Do you think fame is easier or harder to stomach today than it was when you were up-and-coming?

"Oh harder. Oh it's way harder. At the height of my career there was no social media. There was no paparazzi, there was no constant presence of photographs and drones and all that stuff. It just didn't exist. If you went to Italy there would be paparazzi, but not here. Because there weren't all the magazines, and there weren't all the gossip rags and all that. I mean, not really. And not so much pressure about how you look, not so much pressure to be naked in movies, not so much pressure about who you were dating. I mean I lived near the beach in Santa Monica and when I was pregnant I would go down in a bikini with my big belly hanging out—you could never do that now. Nobody paid any attention, nobody knew who I was. I feel really lucky 'cause I don't know if I would have survived."

Is is true that you gave Chelsea Handler some naked pictures of yourself for her 40th birthday?

"I'm not giving anyone naked pictures of me."

"Now, maybe one body part naked. But my whole self naked? No."

In
the MAKERS video
you talk about how you were always cast as "the good girl," and then you got this role in They Shoot Horses, Don't They? and everything changed for you. For the rest of us women who aren't actresses, what's your advice for breaking out our braver selves?

"I think the way that I would recommend doing it and the way that it happened for me is something really, really mattered to me. And that was ending the Vietnam War. Exposing what was really happening because of us in Vietnam, which I found out about from soldiers who'd been there. This isn't something that I kind of read about. Soldiers said, 'You don't understand what we're doing.' I wanted to end the war. It invaded my body. I would have died to make that happen. When you feel strongly about something, and you know who you are and you know where you're coming from, and I knew what my intensions were, and then you bump up against resistance—but you know if you're really sure—that's when you learn to be strong and to not worry about whether someone likes you or not. Because you know who you are and you know that you're not on earth to please other people. You're on earth to do what you feel is right. And you may make mistakes along the way, but you learn to stand up for your beliefs. And that's what makes you strong, and that never happens in the movies. It wasn't 'cause of any movie—it was my becoming an activist that that happened."

So you knew who you were in your 20s?

"It wasn't until I started to become a feminist that I began to realize that I was developing my own narrative. And that's where wholeness begins. Not to invalidate if you come upon someone with a really good narrative—borrow it! Fake it 'til you make it. You know what I'm saying?

But that was why feminism was so important to me, 'cause it allowed me to understand what my narrative was as a woman. I never could have otherwise."

Today you said, "I would wager that every single person here carries wounds…learn from your wounds and your scars." How does that thinking factor into your memoirs?

"When I was preparing to start writing, I said, 'I want to make it useful.' And sometimes people would sort of say things like, 'You've been famous most of your life, you're privileged, why do you think that what you would have to say could possibly be relevant to anyone else?' And I sort of sensed that if I...you know, women are not supposed to tell the truth."

"We're supposed to make things better. We're supposed to make other people feel comfortable as opposed to telling our truth. And when we tell the truth it's kind of revolutionary and I sort of felt if I really tell the truth, as I see it, to the extent that I can, it will be relevant. So I wrote my memoirs and still to this day—it's been translated in 17 languages—I get letters from men as well as women saying, 'You should see my copy of your book. It's underlined and dog-eared, and I feel like you were writing about me.' And then they'll go and write a 12-page letter telling me their life story. It's so beautiful, and they need to share it. And it's always full of so many scars. It's just amazing what human beings can withstand.

And because I'd written about sex abuse and my mother's sexual abuse and everything, I mean the things I get from women and girls are just heartbreaking. Here's what keeps me from being cynical: So often these people feel they've been broken only to find in fact that they were broken open."

It was profound when you said in your talk, "Understand that the events and the people that gave you those wounds, they had nothing to do with you."

"Especially if it happens when you're young. But healing is possible. One of my best friends—in fact I'm having dinner with her, [The Vagina Monologues author] Eve Ensler—is such a great example. Incest for a decade as a child, and when he stopped that, then he would beat her. And she took that wound and became a warrior. And that's what she helps girls and women do: turn those deep scars into warrior-hood.

The Vagina Monologues became V-Day and every year in a thousand countries—800 campuses in the United States—it will be performed. And how many young women I have met who became activists because of that play.

I saw the play in 2000. I was newly-separated. I was a theoretical feminist before then—what I mean by that is I read the books, I knew the right people, I made movies with women in central roles and so on. But it wasn't until I saw The Vagina Monologues—and I was lucky enough to see one of the last performances that Eve gave where she played all the parts. I never saw it more powerful than when she played all the parts. I wept a lot, but I think it was while I was laughing that feminism dropped into my body. And I became an embodied feminist. I could feel it happening. Everything changed."

This content is created and maintained by a third party, and imported onto this page to help users provide their email addresses. You may be able to find more information about this and similar content at piano.io
Advertisement - Continue Reading Below
More From Celebrity
Elizabeth Hurley, 55, Shows Off Toned Abs On Insta
Keira Knightley Won't Do Nude Scenes Filmed by Men
Advertisement - Continue Reading Below
Kourtney Kardashian Is Dating Travis Barker
Priyanka Chopra Jonas Talks Her New Memoir
Priyanka and Nick on Their Quarantine Quality Time
Priyanka Pulls Back the Curtain
Sussexes Will Return to Social Media, Harry Said
A-Rod Celebrated J.Lo's Inauguration Performance
The 6 Most Expensive Royal Wedding Dresses
Inside Kitty Spencer's Stunning £19 Million Home