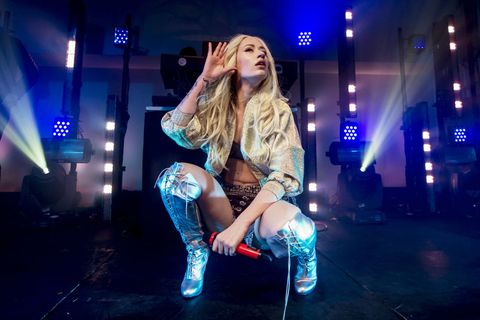 You've got to respect Iggy Azalea—she knows the score and, true story, she survived on one pair of shoes for two years after running away to Florida when she was 16.

In an interview with Vanity Fair, the musician behind earworm-of-the-summer "Fancy" addresses everything from Steve Madden to grocery shopping to sex tapes. But the most compelling part is when she's asked if she thinks the criticism of her music is misogynistic.

"Well, they don't say that stuff about Macklemore," she said, referring to the comment-section standard "She Can't Be a Real Rapper If She Sings About Heels." "So, yes, I think it has 100,000 percent to do with the fact that I have a vagina."

Elsewhere in the Q&A, the star fields a question re: the supposed "weirdness" of being a rapper who's white, Australian, and female. "If you go back to the Rolling Stones and Elvis Presley and Eminem—they've all basically done black music," Azalea said. "I felt this wasn't that far from what we've seen in music history over and over again."

You know what else we keep hearing about? That it truly is tough being a woman in the music industry. To that we say: Let's give 'em hell, girls.

Rita Ora: "The Music Industry Is Harder for Women in All Aspects"