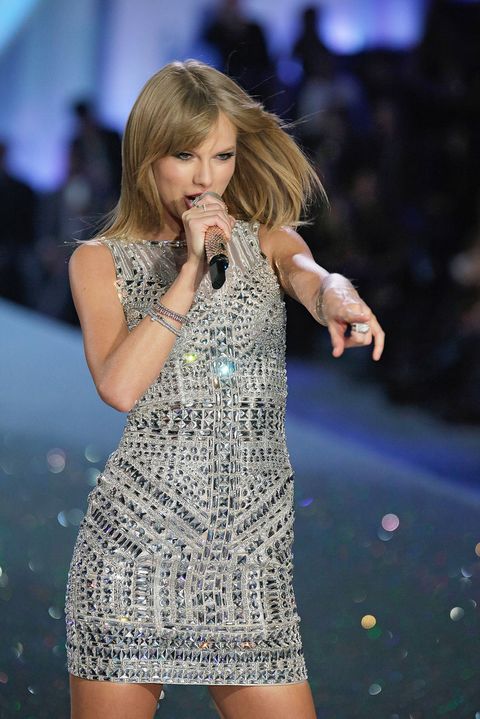 Update, 5/2: From her work on Game of Thrones, Sansa Stark/Sophie Turner has become a master of covering up the truth. Sometimes, it's about Jon Snow; sometimes, it's Taylor Swift being a shiny disco mutant.

Deepening the mystery surrounding X-Men: Apocalypse's Dazzler, whose power is converting sound waves into light and energy beams, Turner posted a mighty interesting #FBF in which Swift is tagged as the Dazzler's record. (Which is titled Sounds of Light and Fury—how on-brand.)

#FlashbackFriday to that time Cyclops and I went shopping at the mall and found our favorite singer’s album (pre 1989, of course).

Turner had previously written off Swift's involvement in the film, but only 25 days until we find out officially.

Update, 7/13: Taylor Swift: so close to getting sonic/optical powers, yet so far because she isn't actually joining the cast of X-Men, probably.

Sophie Turner set the record straight at Comic-Con, telling E! News that incendiary Twitter pic was merely the result of a chill, strictly non-actor-y hangout sesh. "We just went to her concert," Turner said. "And then I guess she wanted to meet us and we really wanted to meet her so we just hung out with her for a bit. Played a couple of drinking games. It was awesome."

Update, 7/9: Just when you thought the Progression of Taylor Swift's Squad—from secret society to paramilitary organization—couldn't go any further, she goes and recruits a band of mutants, just like Beyoncé kind of.

E! News reports the internet is freaking out about this picture X-Men: Apocalypse producer Simon Kinberg posted on Twitter yesterday because the only possible reason she could be standing next to him, Jean Grey, and bald James McAvoy is that she is playing Dazzler.

I mean, she *has* got the whole sparkly outfit and stunning people with sound stuff down...

But maybe she's just a fan?

Original post, 6/22: Most of us are under the impression that Beyoncé already has the superpower of unshakable ***flawlessness—except for that one time—but teleportation, plasma bombs, and/or cheetah-like agility couldn't hurt, right?

According to the Daily Star, the Golden Globe nominee who once also played an international pop star in Pink Panther is reportedly in talks for the Avengers sequels Infinity War Parts 1 and 2, which are set for release in 2018 and 2019. "We would love to have Beyoncé on board, almost certainly as a newcomer to the screen from Marvel's existing catalogue of comic book characters," a senior Disney executive said. Possible parts we're imagining:

Um, how about we just throw in replication and have her be them all? *nudge nudge*