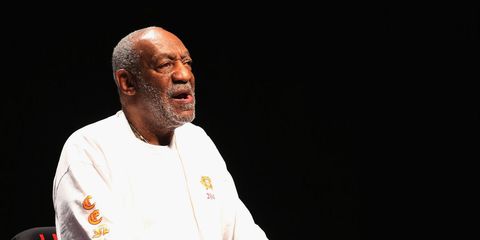 Dozens of women have come forward in recent years to accuse Bill Cosby of sexual assault, many claiming he drugged them beforehand. And although Cosby has never been formally charged, newly released documents reveal that he testifyied under oath to drugging at least one woman before sex.

The documents come from a lawsuit filed by a former Temple University employee who accused the comedian of raping her after giving her a powerful sedative. (Cosby says he gave her three half-pills of Benadryl, but didn't admit to doing anything without her knowledge.) Ten years after the case, the Associated Press went to court to get the documents released. Cosby's lawyers pushed back, saying they would be embarrassing for the star, but the court ruled to release the documents, claiming Cosby has voluntarily entered the public arena by preaching frequently about morality.

The documents present us with Cosby's admission of guilt—even if only partial. His lawyers insist the women knew they were taking sedatives at the time.

The statute of limitations has passed on most of the cases against him, and this specific case was settled in 2006. But here's the fascinating, eye-opening, chill-inducing takeaway.

1. Cosby admits that he got seven Quaalude prescriptions to use on women for sex.

Troiani: When you got the Quaaludes, was it in your mind that you were going to use these Quaaludes for young women that you wanted to have sex with?

Troiani: Did you ever give any of these young women the Quaaludes without their knowledge?

Cosby's lawyer intervened and prevented Troiani from answering the question. This refusal led Troiani to file the document to a judge, asking him to make Cosby answer.

2. Cosby's lawyers *really* don't want him to testify to whether or not he used the drugs on women without their knowledge, and how many women he gave them to.

Troiani: Did you ever give any of those young women the Quaaludes without their knowledge?

O'Connor: Object to the question. Restrict it to the Jane Does, would you, please.

Cosby: I misunderstood. Woman meaning [name redacted], and not women.

Troiani: Okay. So you're saying you never gave the Quaaludes to anyone other than [name redacted]?

O'Connor: Don't answer the question. You can ask all the questions you want about the Jane Does. …

Troiani: Earlier I believe you testified that you had given the Quaaludes to other women; is that correct?

O'Connor: Do not answer that question.

3. The plaintiff's lawyers claim that Cosby made a deal with the National Enquirer to suppress a story about another alleged sexual assault.

Cosby: I would give them an exclusive story, my words.

Troiani: What would they give you in return?

Cosby: They would not print the story of— print Beth's story.

Troiani: Did you ever think that if Beth Ferrier's story was printed in the National Enquirer, that that would make the public believe that maybe Andrea was also telling the truth?

Troiani: So that you knew when this article was printed, when you told the Enquirer this, that you had to make the public believe that Andrea was not telling the truth?

4. Another witness, aside from the plaintiff, came forward to say that when she was 19, Cosby gave her Quaaludes and had sex with her.

Cosby: I meet Ms (Redacted) in Las Vegas. She meets me back stage. I give her Quaaludes. We then have sex. I do not—I can't judge at this time what she knows about herself for 19 years, a passive personality. T----- was sweet in her personality. As far as I was concerned was well-mannered, didn't demand or give a feeling that she was above anyone. If anything, I think she may very well have been very happy to be around the show business surroundings.

Cosby: You'll have to ask her.

5. Cosby says he gave the plaintiff of this case Benadryl to sedate her—but the plaintiff argues that it had to have been something much stronger.

Here's the main document, via Deadspin:

This content is imported from Third party. You may be able to find the same content in another format, or you may be able to find more information, at their web site.
This content is created and maintained by a third party, and imported onto this page to help users provide their email addresses. You may be able to find more information about this and similar content at piano.io
Advertisement - Continue Reading Below
More From Celebrity
Will's Talk with Charles That Led Him to Kate
The Queen Saved Will from a Breakdown as a Teen
Advertisement - Continue Reading Below
Blake Can't Believe She's Still Married to Ryan
Hilary Duff Reveals Her Pregnancy on Instagram
Prince Philip Has "Walked Away" From Prince Harry
Jessica Mulroney Slams Fake Friends on Instagram
Serena Posted Olympia's First Tennis Lesson on IG
Camila Cabello's Hair Has *Never* Been This Short
Diana's Note About Her BBC Interview Is Missing
Melania Didn't Want to Hold Trump's Hand Again