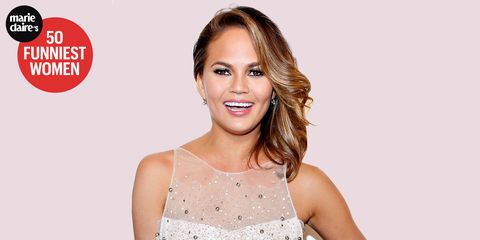 Supermodel Chrissy Teigen has a super lol-worthy Twitter feed. It's time to learn from a master. 🙏

Use punctuation—or, you know, don't.

"This is going to sound so fucking nerdy, but honestly, sometimes a period can change a tweet and make it funnier. Or not having a period. Even capitalizing something!"

Remember: No one cares about your job.

"I don't like to talk about work things. For me, work isn't funny. But it's funny for me to talk about Real Housewives or mundane shit I see at the airport. You just have to think of scenarios where people can relate. I get the most retweets from airport tweets and avocado tweets for some reason. Avocados dying really hits home for everybody. It's too real for them."

Bad cell service can be a good thing.

"There are so many things in my drafts folder that I am so glad I never posted. For some reason the gods gave me bad service and a tweet was unable to send, and thank goodness for that. I just love Twitter so much—I'll be showering and something will happen to me in the shower and I'll want to grab my phone and tweet about it."

"There are people on Twitter that proclaim themselves to be assholes—and they'll say it in their bios: 'self-proclaimed asshole!'—or they'll name themselves Snarky McJoe. But the great thing about Twitter is that everything passes, absolutely everything. So laugh at yourself. Be the first one to make a joke about it, like that episode of The Office where Michael fell into the koi pond and everyone is ragging on him and finally he stopped and was like, 'I am such a dork.' They felt bad and were like, 'No Michael, you're not a dork!' I live by my Michael Scott rules."

A version of this article appears in the August 2015 issue of Marie Claire on newsstands July 21.

Jen Ortiz Deputy Editor, Cosmopolitan As deputy editor, Jen oversees Cosmopolitan's daily digital editorial operations, editing and writing features, essays, news, and other content, in addition to editing the magazine's cover stories, astrology pages, and more.
This content is created and maintained by a third party, and imported onto this page to help users provide their email addresses. You may be able to find more information about this and similar content at piano.io
Advertisement - Continue Reading Below
More From The 50 Funniest Women of 2018