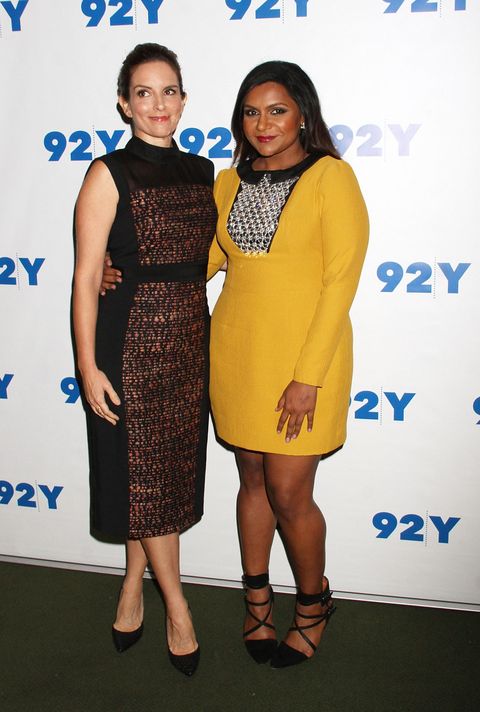 Tina Fey has never shied away from a Bill Cosby joke. In fact, she and Amy Poehler were some of the first to go there when they hosted the Golden Globes. She continued her fearless streak during a Q&A with Mindy Kaling Wednesday night, and things got a little weird.

Us Weekly reports the two of them spoke at an "In Conversation" event at the 92nd Street Y in New York City, timed to promote Kaling's new book, Why Not Me? Since it was the night of the second GOP presidential debate, the two of them got to talking about politics.

Kaling said that even though she disagrees with his entire platform, she can't help but admire Donald Trump. "His terms and phrases are amazing," she said. "I love that he's like, 'You're a loser!'" And then things got a little weird. Fey asked if she would "make out with Trump," and Kaling didn't miss a beat. "Yeah, like for a couple hours? Sure!"

Fey didn't stop there. She then started a Would You Rather game, and asked whether she'd sleep with Trump or Bill Cosby. Kaling cringed, but Fey fired back: "With Bill Cosby you could sleep through it." Yikes. On a less horrifying note, she said she'd sleep with B.J. Novak ("I've done that!"), marry Stephen Colbert, and regrettably kill Michael Fassbender.

As for historical hot dudes? Kaling said she'd sleep with Ulysses S. Grant, while Fey would prefer Andrew Jackson. "Robert E. Lee was very handsome," Kaling joked. "I get why they don't talk about it. He was on the wrong side of that."

This content is created and maintained by a third party, and imported onto this page to help users provide their email addresses. You may be able to find more information about this and similar content at piano.io
Advertisement - Continue Reading Below
More From Celebrity
A Brief History Lesson on Brad and Jen
Rihanna and A$AP Were Spotted on a Date
Advertisement - Continue Reading Below
Prince Harry Is "Really Missing" Meghan Markle
J.Lo and A-Rod Are "Completely Back On"
Chrissy Shared the Cutest Photo of Luna and Miles
Gaga Stuns in a Wedding Dress for 'House of Gucci'
Prince Harry Is Quarantining at Frogmore Cottage
Meghan Markle Expresses Sympathies to the Queen
Prince Harry Remembers Prince Philip
Prince William Statement on Prince Philip's Death