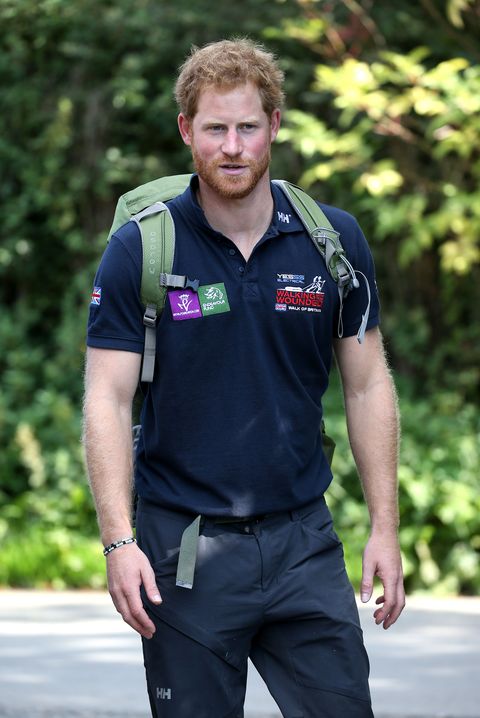 Budding thespian Prince Harry might have the beard of a Tribeca dad, but as he recently said during a 17-mile trek for Walking With the Wounded's Walk of Britain, he has the insides of a 31-year-old who's not quite ready to commit.

— The Duke and Duchess of Cambridge (@KensingtonRoyal) October 1, 2015

Asked by ITV News whether he was "any closer" to settling down, Bad Uncle Harry said (via E! News) "No. You know, at the end of the day, there are a lot of things to get down before settling down. I've got another seven miles to walk now, which I'm really not looking forward to. Eight? Great! I think everyone looks forward to settling down, but in the meantime it's work as usual, so let's crack on."

— The Duke and Duchess of Cambridge (@KensingtonRoyal) September 30, 2015

Speaking with the Mirror while puffing along at the same event, he called his late mother Princess Diana the inspiration for this charity work.

"It's equally important, if not more so, to do the stuff behind the scenes," he said. "It's something that our mother did a lot of and that's the time you really get to learn, you get the experiences and you actually get the honest truth out of people."

Spoken like a grounded (busy) dude who's just waiting for the right girl to come along. 🙋

Chelsea Peng I'm Chelsea Peng, the assistant editor at MarieClaire.com.
This content is created and maintained by a third party, and imported onto this page to help users provide their email addresses. You may be able to find more information about this and similar content at piano.io
Advertisement - Continue Reading Below
More From Celebrity
Victoria Beckham Shuts Down 'Spice World 2' Rumors
Kendall Jenner Shared Her Experience of Anxiety
Advertisement - Continue Reading Below
'The Voice' Star Blake Shelton Opens Up About Gwen
Sussexes Share New Birthday Photo of Archie
Charles Is Still Upset Over Harry's Oprah Tell-All
Meghan and Harry Share New Archie Photo
The Cambridges Share Their First Full YouTube Vid
Courteney Cox Said the 'Friends' Fountain Was Grim
Meghan Wins Copyright Claim Over Letter to Father
The Royals Wish Archie a Happy Second Birthday