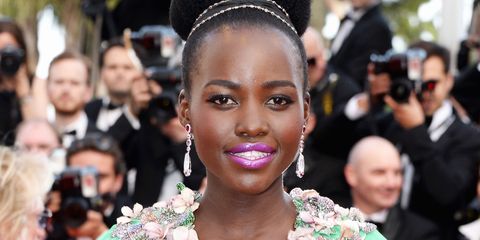 With an Academy Award under her belt and a role in Star Wars on the horizon, it's fair to say that Lupita Nyong'o is living her best life. But the 32-year-old actress has also experienced the marginalization that too often comes with being a person of color in Hollywood.

"If you turn on the television and you are not represented on that television, you become invisible to yourself," she told Elle U.K.. "And there was very little of myself that I saw on TV, or in the movies that I was watching, or in magazines that were lying around the salons or around the house. And so these are subconscious things. Yes, Western beauty standards are things that affect the entire world. And then what happens? You're a society that doesn't value darker skin."

Institutional racism is an ongoing problem in America, but Lupita felt even more othered while living in Mexico. "People would stop and take pictures of us just because we were black," she said. "And it was a time during that tricky adolescent phase when you're coming into yourself and you're trying to pave your own way but you're insecure about where you lie. It devastated me."

Lupita is a beautiful representation of black women in cinema, but the playing field is still uneven. A study of films in 2014 found that 74% of all female characters were white, 11% were black, 4% were Latina, 4% were Asian, 3% were "other worldly," and 4% were "other." Pretty bleak stuff.

Can we agree that these numbers need to be balanced so all children see themselves represented on screen?