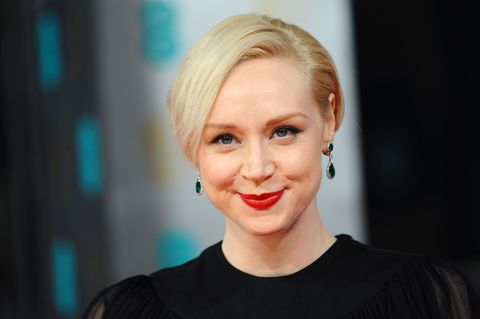 Gwendoline Christie has been cast in pretty much every epic series—The Hunger Games, Game of Thrones, and, now, Star Wars: The Force Awakens. But even she gets blindsided by twists she never saw coming—including that her Star Wars character, Captain Phasma—the first female villain of the franchise—was originally conceived as a man.

"Really?" Christie said (her mouth dropping open according to Vulture). "No. No! It's so interesting, because I'm really uncovering more about this film from people like you than I knew before! Please just tell me everything he said!"

The writer, Kyle Buchanan, then went into the story of how co-writer Lawrence Kasdan had just revealed to him that the script—in shambles—had come to him after the original writer was released from the project, and that every casting decision was being made as the film was being written in its to-hit-screen form.

"Everything was happening simultaneously," Kasdan told Buchanan. "When the idea came up to make Phasma female, it was instantaneous: Everyone just said, 'Yes. That's great.'"

As for Christie, she is excited that they were able to see the character as female, not only for her casting sake, but for future films.

"I could not believe that a Star Wars film was doing something as progressive as this, I really couldn't. And I don't know if you agree with me, but I really do feel like an evolution of sorts is occurring. Entertainment projects like Game of Thrones, The Hunger Games, andStar Wars have a more diverse range of characters—male and female, but particularly female—and what audiences seem to be saying is, 'We like this and this is what we want to see. We want to see something more unconventional than all the things we've seen before.'"

Samantha Leal Senior Web Editor I'm Sam, the senior editor at MarieClaire.com.
This content is created and maintained by a third party, and imported onto this page to help users provide their email addresses. You may be able to find more information about this and similar content at piano.io
Advertisement - Continue Reading Below
More From Celebrity
The Best TV and Movie Wedding Dresses of All Time
47 'Friends' Facts Every Superfan Should Know
Advertisement - Continue Reading Below
40 Celeb Exes Who Worked Together After a Breakup
35 Unforgettable Royal Wedding Scandals
The 50 Most Popular Episodes of ‘Friends,’ Ranked
Iconic Party Photos From the Past
40 Celebrity Sisters Who Look So Much Alike
40 Rare Photos of Grace Kelly Through the Years