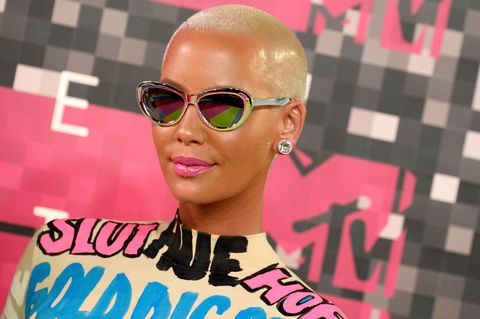 Amber Rose has become a vocal member of the pop culture feminist movement, and her feelings on "slut-shaming" are especially noteworthy. Amber has been criticized for being promiscuous throughout her career, but the problem started in middle school when she was simultaneously victim-blamed and slut-shamed after being sexually assaulted.

"This boy stuck his hand all the way up my skirt," Rose told MTV. "I was sitting on the edge of the stage in the auditorium, and he sat down next to me and put his hand up my skirt… I went to principal, and I told her that I felt extremely violated. I couldn't believe that he had touched me like that. And she blamed me. She said, 'You shouldn't even be wearing a skirt like that.'"

Amber's next comment hits the nail on the head: "In the seventh grade, my skirt was not that short — but even if it was, that didn't give him the right to shove his hand up my skirt."

As much as we'd like to say that things are different now, victim-blaming and slut-shaming are still huge problems. But the more people who join Amber's sex-positive movement, the closer we'll get to women feeling safe and respected — whether they're wearing short skirts or not.