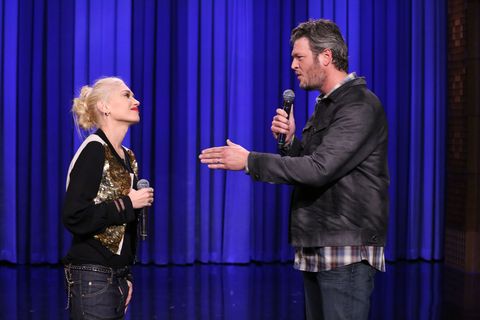 Gwen Stefani and Blake Shelton parted ways with their respective spouses in 2015, proving a) love is dead, and b) no one should ever hire a nanny. But then something miraculous happened—a gift from Santa himself, if you will.

Blake and Gwen met while filming NBC's The Voice, fell in love on live television, and became a beacon of hope for what's otherwise been a terrible year for celebrity relationships. While the new couple attempted to keep their love connection somewhat under-the-radar, it looks like they've given in to popular demand right in time for the holidays.

Gwen tweeted a video message to fans wishing them Merry Christmas, along with a video of Blake repeatedly kissing her cheek as she beams at the camera. And the best part? They're both in full hunting regalia.

Moral of the story: 'tis the season to make out with your boyfriend while wearing matching camo outfits.