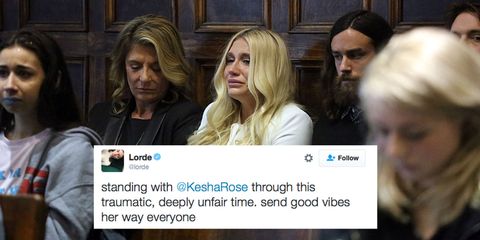 On Friday, Kesha burst into tears as Manhattan Supreme Court Justice Shirley Kornreich ruled that the singer will remain under contract with Sony and Dr. Luke, the music producer that she is suing for emotional, mental, and sexual abuse. The day before the court date, Kesha posted an emotional message on Instagram in which she wrote, "this is not just for me. this is for every woman, every human who has ever been abused. sexually. emotionally. mentally."

I have nothing left to hide. I did this because the truth was eating away my soul and killing me from the inside. this is not just for me. this is for every woman, every human who has ever been abused. sexually. emotionally. mentally. I had to tell the truth. so the outcome will be what it will be. there's nothing left I can do. it's just so scary to have zero control in your fate. but this is my path this life for whatever reason.... #Friday 🙏🏻

Under Friday's ruling, the judge says the singer is not obligated to continue working with Dr. Luke (whose real name is Luke Gottwald), and noted that Sony had provided her with the opportunity to collaborate with other producers. However, Kesha's attorney claimed that there was nothing concrete to back up those promises, and that the star is worried Sony will refuse to promote her music if she is paired with another partner.

Dozens of fans gathered outside of the NYC courthouse to support Kesha.

A petition to release her from her Sony contract has already gained over 120,000 signatures, and the hashtag #FreeKesha is trending on social media. But more public encouragement has come from celebrities themselves, who have joined the fight and extended their support to Kesha.

There are people all over the world who love you @KeshaRose. And I can say truly I am in awe of your bravery.

My heart is with @KeshaRose. 💜

Trying 2 not say anything since I can't say anything nice about a person... so this is me not talking about Dr. Luke https://t.co/lLhtUHbmgG

This is some legit bullshit #FreeKesha https://t.co/EDgIXYnoIp

Reading up on this trend and I am lost for words. #FreeKesha Sending so much #GirlLove