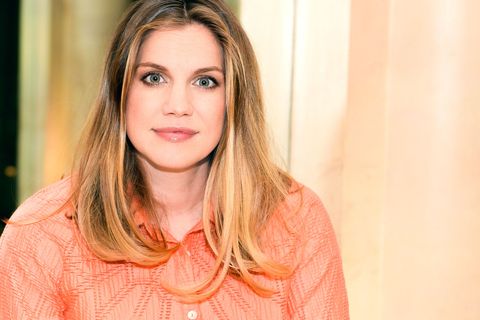 Straight up: Anna Chlumsky is nothing like her Veep character. A fact that became apparent when she leisurely picked out nail polish for our pedicure date while a stressed employee looked at the clock. Let's just say Anna on Veep = sleep-deprived, stressed, and permanently affixed to her cellphone. Anna IRL? Decidedly chill, seven months pregnant, and—on that note—also sleep-deprived.

While there's approximately zero chance that Veep's Amy would take time out for pampering, *my* life motto is "treat yo'self"—even when interviewing an iconic child star (My Girl, guys. My Girl). Sure, our fellow mani/pedi recipients at tenoverten salon may have been slightly confused by our too-loud conversation about the C-word—but anyone listening came away knowing this indisputable truth: Anna Chlumsky is goals.

Keep scrolling for Chlumsky's views on everything from last f*ckable days to no-nipple clauses, and find out why she's so not here for political discussions—despite being on TV's smartest political show.

Marie Claire: We have to talk about Veep's "C--t Gate" episode. Selina is right when she says the C-word is the worst thing you can call a woman, yet the episode was so hilarious. What are your thoughts on the word outside the confines of Veep, and how did you feel about having to say it?

Anna Chlumsky: Julia Louis-Dreyfus has tried to say that word in the show as many times as she can, and has always used it judiciously because it's such a loaded thing to say. For it to actually become the entire episode is so brilliant. I'm like you, I always euphemize it. And I've only even felt that way about a person once, and that's a character on a show. I used to say that Cersei Lannister on Game of Thrones was the only person I could use that word for, but now I can't because she's been rounded out. Myself, I feel more responsible and judicious with that word, but our characters are not. And that's what's so fun about that episode.

MC: At its heart, Veep is a show about politics. Do you feel like there's some weird responsibility for you to be vocal about the election because of that?

AC: Absolutely not, an actor's responsibility is to play a character truthfully. That's their responsibility. That's where it ends. If they choose to use their reach and accessibility in order to further something that matters to them, that's their choice and that's great—but it's not for anybody to choose it for them. The way I always am is, if someone asks me a question, I'm not going to lie or spin it. I'll answer as truthfully as I can, but I'm not an activist. I'm just too lazy.

MC: I feel that men never get asked this question, which perhaps inherently makes it sexist. But since I have kids, maybe I can get away with it: How do you balance motherhood with work?

AC: Day-to-day scheduling is always a conflict. You go, "Oh, I want to go to that awards show because when am I ever going to do that again?" But then you go, "Yeah...except this other thing is more important." It's more the micro day-to-day stuff that becomes a daily task as opposed to worrying too much about the career.

MC: Do you feel like you get family-oriented questions like the one I just asked more than your male costars? That seems unfair.

AC: It's true females do have to deal with a different standard. That's just because of the patriarchal society we're in. But it's getting better, and thank god the dads are better. That said, Blackish did an episode about this, where the dad got cupcakes and everyone was like "you're amazing!" The dad can do a minimal version of what's expected of the mom.

"No one congratulates me just for strolling a kid down the sidewalk. They're probably judging me for some reason. But we see a dad with a baby and we're like, 'Good for him! Hero!'"

MC: Yeah, when my boyfriend and I got unexpectedly pregnant, everyone's attitude was, "You're so lucky he's staying with you!" Was anyone saying that same thing to him about me? Nope.

AC: Yeah, I mean, I have a really supportive husband, he's really shown up, he loves being a dad, and we're really balanced in our duties. I know how lucky I am. At the same time, no one congratulates me just for strolling a kid down the sidewalk. They're probably judging me for some reason. But we see a dad with a baby and we're like, "Good for him! Hero!"

MC: I assume you've seen Amy Schumer's "Last F*ckable Day." What do you make of the idea that actresses reach some invisible line where they start being cast as the mom instead of the girlfriend?

AC: I'm just on the cusp of that right now. Listen, everybody's f*ckable, and the women in that sketch certainly are. But what it's really about is how much Hollywood objectifies their talent. They forget that they're actually playing characters and telling stories, and they think of them only in the sense of how much they can sell.

MC: What's interesting about Veep is that they *could* objectify more—at least in terms of random nudity that serves no purpose—and they don't. There are tons of other shows on HBO that happily show boobs for the sake of boobs. Do you feel lucky in that sense?

AC: I do feel lucky. In theater, I've been asked. There was one show with a sex scene that could have gone anywhere. We wanted to nail down in the contract that I wouldn't be naked. It wouldn't further the story, so we asked for a no-nipple clause. The director wouldn't do it. He wanted shock value, but does that serve the story?

"There's a theory out there that if you're in a public profession you're fair game. I couldn't disagree with that idea more."

MC: That's an interesting way of looking at it: How does random female nudity further the story?

AC: If you can tell a story without it, don't do it. That's the bottom line. He made fun of me for asking for the no-nipple clause when we rehearsed that scene. And I just looked at him straight-up and was like, "Pay me more. Oh really, you want to get into this conversation in front of other people? Sorry, doesn't further the story and you haven't given me the incentive to do so." Not that I'm for sale, but you know what I mean.

MC: Speaking of objectification, as a former child actor, what do you make of the way media obsesses over the public "breakdowns" of Hollywood child stars? Were you worried about that as a kid?

AC: I was lucky because the internet really became a thing when I was like 14. The good thing is I was never that popular—like, I was never in Tiger Beat, you know what I mean? I think I got to disappear a little bit and I'm fortunate for that. Both entertainment media and the public have a really skewed vision of what their entitlements are to people's lives. There's a theory out there that if you're in a public profession you're fair game. I couldn't disagree with that idea more. Especially with children—half the time they don't choose to be in that profession. For people to objectify other people's lives—kids or not—I find very tedious and tiresome. People who have a craft, that's their job. Their job isn't to create fodder for other people who are bored.

MC: Not that you have much free time, but in the little you *do* have, what pop culture do you obsess over?

AC: I will pay attention to most soccer tournaments. Oh my god, last night's game was insane. Anybody? [Editor's note: crickets.] If I have time for extra stuff, I'm paying attention to that.

MC: A) That's awesome, and B) I hate when media talks to intelligent women who are into sports and the headline is "BREAKING: WOMAN LIKES SPORTS!"

AC: It's funny...every time I bring up comic books or my fantasy football team to a guy, he's like 'Oh my god, my dream girl," and I'm like, "Well thank you...but there must be other women who are into it." But it's not bad being a dream girl, I suppose!

Mehera Bonner Contributor Mehera Bonner is a news writer who focuses on celebrities and royals.
This content is created and maintained by a third party, and imported onto this page to help users provide their email addresses. You may be able to find more information about this and similar content at piano.io
Advertisement - Continue Reading Below
More From Celebrity
Will and Kate Attend the ‘No Time to Die’ Premiere
Meghan Markle Might Not Ever Go Back to the UK
Advertisement - Continue Reading Below
Are Angelina Jolie and The Weeknd Dating?
Kate and Will Ate Burgers With Their Kids
Meghan Markle's Handbag Was a Nod to Diana
Ben Affleck and Jennifer Lopez Made Out in NYC
Lady Gaga Stunned in an Old Hollywood Look
Olivia Rodrigo Looked Jaw-Droppingly Beautiful
Will's "Alleged Bullying" Drove the Sussexes Out
Sam Asghari Opens Up About Britney Documentaries