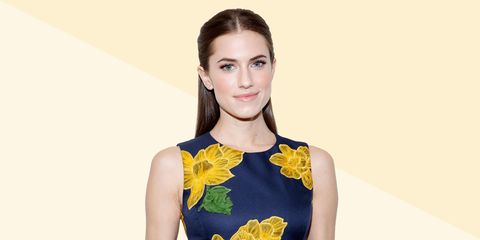 As consumers of pop culture, we tend to (kiiiiinda unfairly) assume our favorite celebrities should have articulate opinions on social issues. And while many celebrities aren't prepared to deliver nuanced off-the-cuff answers to questions about rape, feminism, and racism, Allison Williams is, 100 percent.

While celebrating Breyers 150th birthday (side note: so much ice cream was consumed over the course of this interview), the Girls star spoke to MarieClaire.com about topics many celebs would shy away from. But are we really surprised? This is the actress who released a sexual assault PSA following the Brock Turner verdict and challenged her own privilege by signing onto a horror film about racism in America. She has a lot to say, and we're game to listen.

Marie Claire: Do you think Girls has changed millennial women's approach to feminism and helped popularize it?

Allison Williams: I don't know if the two can be separated. I think Lena has done so much to educate young women and millennial women about, first of all, what it means to be a feminist. Which is much less militant than anyone thinks it is if they didn't grow up around the term. Lena's done an incredible job of being like, "no, no, it's just that you think women should have equal pay and equal rights. We are equal to each other." The more times people say that, the less of a big deal it becomes for people to say that they're feminists. But I think the girls on Girls struggle with their feminism. It's probably sparked some really good conversations about the topic. But my hope is that Lena's been able to provide enough information and knowledge extracurricularly to inform those conversations, and make sure they're on the right track. I think it would be very hard to be a fan of our show and believe in male supremacy.

MC: We were so moved by the cast's sexual assault PSA. What did making that mean to you?

AW: I came out of a year of reading Missoula by Jon Krakauer, watching The Hunting Ground, watching 30 for 30 about the Duke lacrosse players. So I've been trying to study and read as much about it as I possibly can. It's something I've been thinking about a lot; I'm trying to figure out what constellation of issues leads to sexual assault itself being such an issue. There are so many things involved: it's the bystanders, it's boys not knowing that they need consent, it's also drinking culture—but to blame all of those things and not say that maybe there's an issue with the way we're raising our boys....

MC: Yeah, it's such a complicated issue, and deserves way more room in our cultural conversation.

AW: It's so complicated, a lot of people stay clear of it and don't talk about it, which is exactly what the problem is. The whole message of our PSA is this is a personal relationship you might have with this event. It could be someone you know and love. You don't even need to worry about any of the politics, you just need to listen, and be there for her or him. My hope was that the PSA would spark people into thinking about sexual assault, and at the very least mean that survivors felt seen. We had already been working on it before the Stanford rape victim's statement came out, which was so striking. It just made us edit it and get it out more quickly.

"Just thinking you're not racist, is so not—you're not *done.* There's so much people need to think about, which I think they're trying to ignore and not think about."

MC: You're clearly really passionate about social issues, and your first feature film, Get Out, is a horror movie that tackles racism. Director Jordan Peele said he wants to use horror as a lens to discuss this hugely important topic—did that draw you to the movie?

AW: A hundred percent. I've never done a movie because I love them too much to do one that I don't love. I've been waiting, and waiting, and waiting for the right one. I get this script—and you assume it's a comedy because it's Jordan Peele—and I read the first page and I was like, "oh my god, this is not a comedy, this is not Key and Peele, this is something totally different." By the time I finished the script, I was already thinking about how I would do it, and obsessed with how to layer my performance so it means different things the first time you watch it, the second time you watch it, the third time you watch it.

MC: It seems like the film will promote a lot of social dialogue.

AW: I was salivating at the idea of the conversations that it would spark in the movie theater, during the movie, and after the movie. I can picture friends going out to dinner and debating things about the movie. Basically, Jordan's thought was why don't people use horror—which attracts such a diverse group of people into a movie theater, specifically millennials—why don't people use it to say anything? Jordan wanted to do something really particular with this, and I was so on board.

MC: So, is that the main reason you were drawn in?

AW: I do a lot of work with Horizons National, so the idea of the lingering, undeniable racism that exists in our country is something that I've spent a lot of time thinking about, learning about, trying to educate myself on, and listening about. So I wanted to do something that would motivate other people to go on that same journey. Just thinking you're not racist, is so not—you're not done. There's so much people need to think about, which I think they're trying to ignore and not think about. The movie is so well-timed, I'm desperate to for it to come out before the election.

MC: Going back to Girls, how has being on the show informed your twenties? It's such an important decade in terms of personal growth and development.

AW:  It's been this incredible safety blanket. Every summer I know I'm going back to set. It's allowed me to be selective about the things that I do, and don't do. It's given me incredible friendships and an amazing experience. I'm so spoiled by the caliber of the actors, directors, and crew members. I just love everyone. It's been the perfect graduate school experience.

Mehera Bonner Contributor Mehera Bonner is a news writer who focuses on celebrities and royals.
This content is created and maintained by a third party, and imported onto this page to help users provide their email addresses. You may be able to find more information about this and similar content at piano.io
Advertisement - Continue Reading Below
More From Celebrity
Royals Had Several Talks About Archie's Skin Color
See Blake Lively's *Impressive* Watermelon Cake
Advertisement - Continue Reading Below
Prince Charles Cant Deal with Harry's Criticisms
Serena Gave Daughter Olympia a Tennis Lesson
Meghan Shared What Helped Her Through 2020
Kylie and Travis Are "Very Close" After Reuniting
Meghan's Book 'The Bench' Tops Best Sellers List
Kaavia Talks to a Bee in an Adorable IG Video
David Harbour on Being Stepdad to Lily Allen's Kid
Ben Affleck Is "Getting to Know" J.Lo's Kids