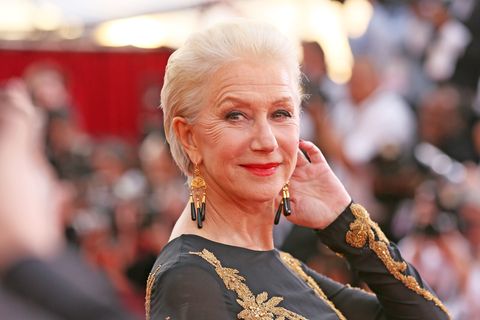 Helen Mirren is one badass woman. It's a fact you already knew, of course—but it's made all the more apparent in this exclusive AOL Makers clip for MarieClaire.com, in which the powerhouse gets personal, sheds insights, and reminds you why she's your role model.

"Any woman now actually is a feminist," she says. "They don't realize it, because they're living in a world feminism has, to a certain extent, created for them. Which is very exciting, because it's entitled. That's what I love about them. They're entitled."

On Being Seen as Displaying "Sluttish Eroticism" as a Young Actress While on Michael Parkinson's Show:

"It was one of the very first interviews I ever did. I'm talking quite seriously about acting, but he had just decided to throw that mantle on me, I guess, and never actually listen to what I was actually saying. I think the '60s and '70s were not a good time for women. It should have been liberating, but actually it wasn't. It squeezed women."

On Being an Advocate for More Female Roles/Gender Diversity:

"I always used to say 'put your energy into changing roles for women in life,' because as night follows day, as women's roles change in life, women's roles will change on the screen. Your banging your head against a brick wall, and a little bit of cement falls away, and I feel that the wall is just about to fall."

Samantha Leal Senior Web Editor I'm Sam, the senior editor at MarieClaire.com.
This content is created and maintained by a third party, and imported onto this page to help users provide their email addresses. You may be able to find more information about this and similar content at piano.io
Advertisement - Continue Reading Below
More From Celebrity
Will & Harry to Walk Together at Philip's Funeral
Beyoncé Wore Tweed Micro Shorts for Date Night
Advertisement - Continue Reading Below
Kristen Stewart's GF Gushed About Her on Insta
Prince Charles Addresses Prince Philip's Death
Prince William Pulls Out of 2021 BAFTA Appearances
J.Lo Wears a Crop Top and Gold Joggers on Set
Prince Philip Said He Had No Desire to Live to 100
JT Is in the Throwback Pic Britney Posted on IG
The Queen Was by Prince Philip's Side When He Died
Prince Harry Is "Really Upset" Over Philip's Death