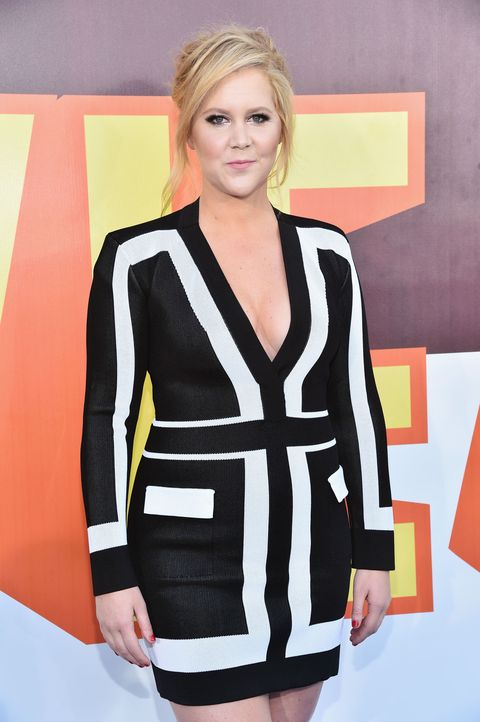 Leslie Jones briefly quit Twitterthanks to a truly mind-blowing barrage of racism that was—without a doubt—one of the worst things we've seen on the internet. Sadly (and despite promises from Twitter to improve "tools and enforcement systems"), verbal abuse on the internet seems to be part of the celebrity experience these days, something Amy Schumer knows well.

The comedian talked to Leslie Jones following her abysmal treatment, and recounted their conversation in an interview with the L.A. Times. Oh, and she also spoke about a slew of other important issues, like sexism, Hillary Clinton, and her high school journal entries. Take note:

On Leslie Jones being trolled on Twitter: "Leslie is a friend and we talked about it. It was just so much hate at once. And you feel like it's never-ending, and it is the truth. She was not used to it. I've had 10 years of people sending a lot of vitriol, and it's been spread out. For her, it hit like a ton of bricks. I told her, 'You're going to come back and be like, you. And it's going to make you stronger.'"

Ok I have been called Apes, sent pics of their asses,even got a pic with semen on my face. I'm tryin to figure out what human means. I'm out

On becoming stronger than her commenters: "In terms of the Internet, I feel pretty strong. I haven't read a comment for a long time that has made me wince in any way. It's more real-life stuff. But I remember how it feels. It feels like your new reality, like your biggest fear has come true. And then once they've come true, you have nothing to be scared of."

.@Lesdoggg is hilarious and strong and beautiful and she will be back with a vengeance I can't wait for you to see what she is capable of

On everyone telling Hillary Clinton to be more likable: "'We need you to dress a little softer, smile more, mix up your intonation.' It's insanely unfair. There's just crazy hypocrisy...We were on set filming when Hillary was giving her speech and the women on the crew were all gathered around a cell phone watching it stream. It was this beautiful, emotional thing to watch together. Some people were crying. And then like two of the 15 women were like, 'She looked great."'What? That's what you just got from that?"

So proud to see @HillaryClinton accept the nomination for #POTUS let's fight alongside her. Let's all work together #imwithher

On eating dinner next to Hillary: It was awkward. But then I broke the ice. I freaked her out on purpose. I asked her, 'You want to get coffee tomorrow?' What???"

On including old journal entries in her book: "They're horrible. I talk about a guy trying to put his toes in my vagina—the first time I was ever shocked. There's a journal entry about that."

On that note, gonna go buy Amy's book with a side order of Ghostbusters tickets. Time to show these women some tangible support. Join us!