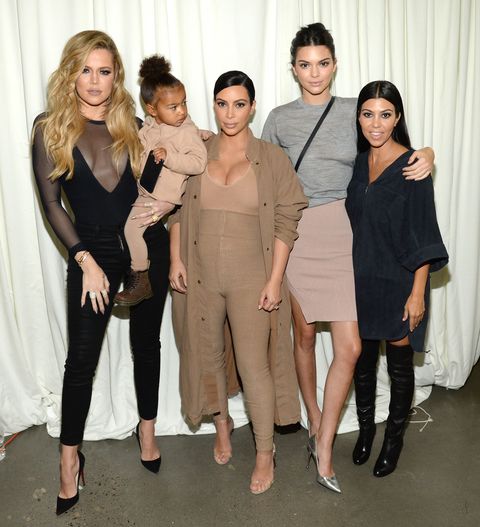 It's been almost 10 years since Keeping Up with the Kardashians came into the world, and it looks like the reality series is finally shutting down production. Us Weekly confirms that the E! show is "on hold indefinitely" following the attack on Kim Kardashian in Paris, during which she was gagged, bound, and robbed of a $4.5 million ring.

Sources say cameras were not on hand in the aftermath of Kim's attack Sunday night, and that E!'s crew have not filmed reaction interviews with any members of the family. The reality star and Selfish author has reportedly "canceled everything for the next several weeks and will not be working," and has flown back to California with her family because she feels safer at home. Kim's husband Kanye West (who was not with her during the attack) has canceled two of his upcoming shows.

Kim is reportedly blaming herself for the attack, re-evaluating her social media output, and is said to have a new approach to materialism.

Note: the end of KUWTK hasn't been confirmed by E!, and family matriarch Kris Jenner has remained quiet on the subject thus far.

Mehera Bonner Contributor Mehera Bonner is a news writer who focuses on celebrities and royals.
This content is created and maintained by a third party, and imported onto this page to help users provide their email addresses. You may be able to find more information about this and similar content at piano.io
Advertisement - Continue Reading Below
More From Celebrity
Katie Holmes' Gingham Dress is Summer Perfection
Ben Affleck Had a Sweet Father's Day Celebration
Advertisement - Continue Reading Below
Selena Talked Being Mocked Over Her Mental Health
Olivia Wilde Was Asked About Harry Styles Romance
What Happens on Katie's Season?
Gigi Shared the Sweetest Photo of Zayn and Khai
Meghan Shared the Cutest Update About Archie
Meghan's Heartfelt Father's Day Gift for Harry
Sophie Turner Shared a Sweet Unseen Pregnancy Snap
The Queen Has a Collection of Dog Toys for Sale