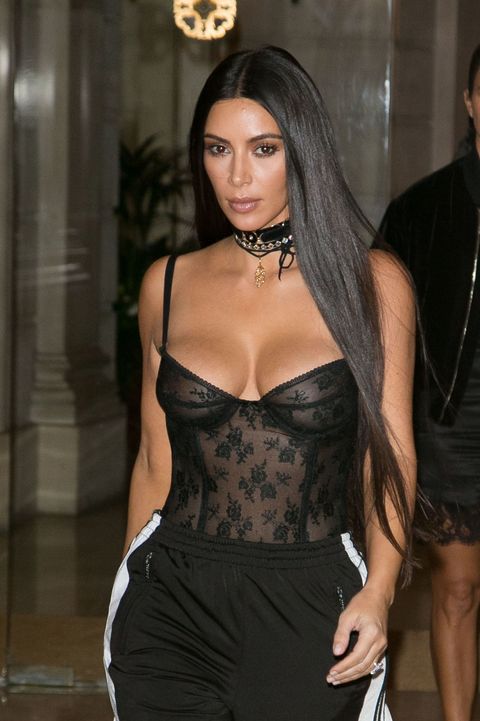 Kim Kardashian is reportedly blaming herself for the attack that left her bound and gagged in Paris on Sunday night—which is equal parts sad and unsurprising considering that most of Twitter (and Karl Lagerfeld) seem to think this whole thing was Kim's fault due to wealth-flaunting.

"Kim's in shock and blaming herself," a source tells People. "She's tearing herself up that she Snapchatted the ring so much and wore it all the time. This incident is making her question everything. How she dresses, what she does."

Okay, yes, there is a valid point to be made about safety and social media—especially as a public figure. But ideally, we should live in a world where a businesswoman who has earned her own wealth should be able to enjoy a diamond ring without worrying she's going to be bound, gagged, and blamed for it.

Speaking of said ring, Kim shut Kanye West down when he offered to replace it. "Kanye wants to buy her the ring again but she just says she doesn't want to think about it," the source continues. "He says he wants everything to go back to normal and for the incident to not affect their lives."

For more information about the stolen $4.5 million ring, head here.

Mehera Bonner Contributor Mehera Bonner is a news writer who focuses on celebrities and royals—follow her on Instagram.
This content is created and maintained by a third party, and imported onto this page to help users provide their email addresses. You may be able to find more information about this and similar content at piano.io
Advertisement - Continue Reading Below
More From Celebrity
The Queen Was by Prince Philip's Side When He Died
Prince Harry Is "Really Upset" Over Philip's Death
Advertisement - Continue Reading Below
Will Harry & Meg Attend Prince Philip's Funeral?
The Queen Is Hopeful Prince Harry Will Return Home
Prince Charles Visits the Queen at Windsor Castle
Harry & Meghan React to Prince Philip's Death
Prince Philip Will Not Have a State Funeral
What 'The Crown' Got Wrong about Prince Philip
Touching Things Queen Has Said About Prince Philip
Your Guide to the Current Royal Line of Succession