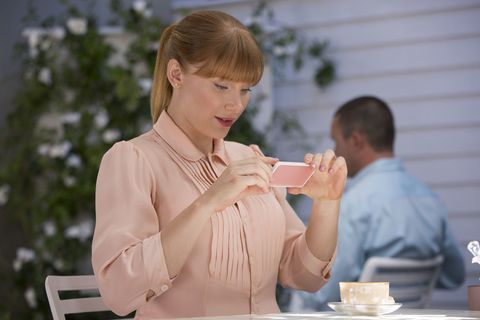 Congratulations if you could get through the first episode of Black Mirror Season 3 without throwing down your phone in horror, because it was a truly eye-opening look at the pitfalls of social media. The premiere of Netflix's haunting anthology series stars Bryce Dallas Howard as Lacie, a bubbly young woman obsessed with improving her score in a society that's entirely based on ratings. Think of it as a heightened version of the virtual reality we already live in, only instead of swiping on Tinder, you're swiping on literally everything.

The episode chronicles Lacie's journey to the wedding of her high-scoring friend Naomi (played by Alice Eve), and the inevitable breakdown she suffers as her rating slips. MarieClaire.com spoke to both Howard and Eve about the episode's unresolved mysteries, how it plays into body shaming (Howard gained 30 pounds just for the role), and their personal relationships with social media.

Marie Claire: What do you think happened after the "fuck you" shouting match at the end of the episode?

Alice Eve: Naomi was obviously really pissed off and would have planned Lacie's murder. There will be getting even. Naomi has to take her gloves off.

Bryce Dallas Howard: For me, that scene was freedom. The eyes were gone, there's no way for Lacie to be hooked into the system. It's like an electronic Sabbath. But what you see from the beginning is that Lacie wants an intimate, safe relationship with someone. For that scene, I was like, "this is a love scene." I think she finds love and finds herself in that moment. I can't see her reintegrating herself back into that society. It's like Plato's cave; you're privy to the illusion, but once you see the real world...you can never un-do that.

"In the culture we live in, there's this pervasive, shared agreement that there's a certain body type to admire, and it isn't actually based on anything real or substantive. It's a truly superficial thing, and there's a cost to that."—Bryce Dallas Howard

MC: There were some subtle nods to body shaming—the spitting out of the cookie, Lacie's past eating disorder, and her determination to fit into a size four dress. Was was the meaning of that?

BDH: For me, that was a huge part of the subtext of the story, to the point where Lacie's in jail and she's taking off her size four dress—I actually gained 30 pounds [for the episode], and I haven't lost all of it yet so I haven't been like "I gained 30 pounds!" Because I don't know if people can tell the difference. But Naomi says "I'll send you a size four," and obviously Lacie doesn't fit into it. At the end, she couldn't even zip the dress fully up. When she's in the cell, I wanted to play the moment like she was almost suffocating. She takes off the dress, and is metaphorically naked for the first time. That's the moment when she engages with her cellmate, and there's love, and she's accepted as she is.

MC: How do you think that obsession with body image plays into our culture?

BDH: In the culture we live in, there's this pervasive, shared agreement that there's a certain body type to admire, and it isn't actually based on anything real or substantive. It's a truly superficial thing, and there's a cost to that. This episode asks, "what are the ways we oppress our authentic selves?" and that's a true form of oppression for women. I feel like it's a subversive thing which keeps women preoccupied with something that doesn't matter, and takes up a lot of space, and prevents people from what they're meant to be doing.

AE: I thought that I had a really healthy relationship with food, and I went home to my parents' house for a week because I cut my foot, and was recovering. I just ate loads, ate family meals, went along with group activities. And I realized how unhealthy my relationship actually is with food. Where I'm like,"no, I won't have that piece of bread, I'll have the veg." There's a different approach mentally that you have when you're in a safe space. Our body awareness in the West is ridiculous.

"You go on Instagram, and it's just not a real reflection of what people do, and how much pain people are in every day."—Alice Eve

MC: We had some disagreement on this in our office...does Lacie get thrown in jail for wielding a knife, or because her rating went down to zero?

BDH: I think it's possible it was because of her rating. It's not necessarily stated in the piece. The other thing I've been discussing with friends is: when you're born do you start at a zero, or five?

MC: In what tangible way has working on this episode changed your view of social media?

AE: What it's done for me is highlight the fact that we need to lean into the cartoon universe of social media. The clearer that division is between it not being a reflection of reality, and being a complete make-believe world, the more we're helping ourselves. You go on Instagram, and it's just not a real reflection of what people do, and how much pain people are in every day. So that's my mental change.

BDH: I joined social media not even a year ago. I joined on Thanksgiving, and then within two weeks I was doing this job. So this show was a part of my mindset, and I was able to think critically about it. Social media is a performance like any other form of entertainment, and acknowledging that is important. For me personally, I don't go onto Twitter or Facebook, my hubby helps me out because sometimes I'm concerned that I'll see something that will upset me, and I don't have a way to work it out with that person. In the beginning, I started posting and someone I'm close to said, "you're only posting pictures of yourself in your grungy pajamas. You're an actress be aspirational." Then I was like, "I'm not living an aspirational life on a day-to-day basis." For a while after that I was only taking pictures of, like, objects.

MC: What was the scariest part of the episode for you?

AE: The airport scene. Because it's almost like the refugee story we're seeing happening, where people aren't allowed to cross, and there is no recourse for humanity. It's horrific.

BDH: It's like when policy overrides humanity. When people just become numbers, and we stop relating to each other as human beings. And we don't have the agency to make choices that can positively affect another human being. I was watching something yesterday where Justin Timberlake took a picture of himself voting, and he might get thirty days in jail because it's a new law or something. That's a perfect example of when laws and policy are not in touch with humanity and what's going on presently, when someone's trying to do a good thing.