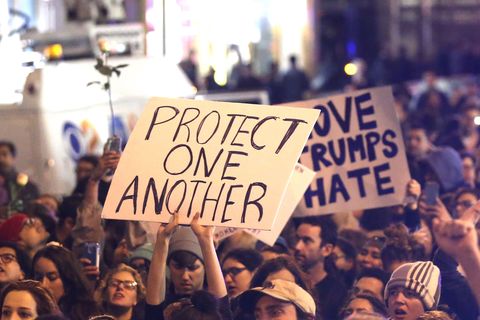 What you are about to read is an aggregation of tweets and stories documenting the alleged hate crimes against women, Muslims, people of color, and other minorities sweeping the country following Donald Trump's election.

The president-elect didn't denounce the behavior until Sunday night, on his 60 Minutes interviewinterview, when he said this in response to Lesley Stahl's questioning:

"I would say don't do it, that's terrible, because I'm going to bring this country together. [...] I am so saddened to hear that. And I say, stop it. If it helps, I will say this, and I will say it right to the camera: Stop it."

As the shock of Trump's win wears off, it's easy to focus on "good news" (looking at you, #BidenMemes) and shield ourselves from the reality that faces us. But we must never shy away from the real-world effects of our votes or opt out of bearing witness to the persecution of others, and the onus is on us to educate ourselves about their experiences. Soon, they could be our own.

Hate speech is reprehensible, and has no place in NYC. To the affected, we stand with you. To the perpetrators, we are better than this. https://t.co/8J4JU56yti

District officials in Maple Grove say they are "horrified" by racist graffiti scrawled today in a bathroom. | https://t.co/cO5EVnUBjz pic.twitter.com/rj0rMoVeJm

A statement from Penn on the current events on campus. pic.twitter.com/CALK7OERup

In Bethesda, Maryland, an elementary school was vandalized with swastikas and "other inappropriate images," according to Bethesda Magazine. The offensive images were spray-painted on school banners, sidewalks, and telephone poles. While the assistant principal was quick to respond to the incident and promised the graffiti will be removed ASAP, the whole situation is made all the sadder/scarier because on Sundays, the school is used by a Jewish congregation for its weekly services.

In Georgia, a Muslim teacher at a high school shared a note written to her by one of her students suggesting that she hang herself with her headscarf. "Your headscarf isn't allowed anymore. Why don't you tie it around your neck and hang yourself with it off of your neck instead of your head," the note, which was signed "America," read.

In Michigan, a University of Michigan student was threatened by a man and told to remove her hijab or he'd set her on fire, according to the Washington Post. She complied and was unharmed, and authorities are calling it a hate crime with officers investigating.

Mehera Bonner Contributor Mehera Bonner is a news writer who focuses on celebrities and royals—follow her on Instagram.
Advertisement - Continue Reading Below
More From Celebrity
Kate Middleton Borrowed the Queen's Earrings
How Goop's Vagina Candle Came to Be
Advertisement - Continue Reading Below
Kim and Kourtney Throw Punches in New 'KUWTK' Clip
Selena Spent Weekend Helping Solve a Murder Case
JFK and Jackie Kennedy's First Year of Marriage
Kate and William Dress Up for Dear Evan Hansen
Kobe Gave His Vanessa a Dress From 'The Notebook'
Will There Be a 'Bachelor' Spin-Off for Seniors?
Beyoncé and J.Lo's Nail Art Tribute to Kobe
Demi Lovato's Gorgeous No Makeup Selfie