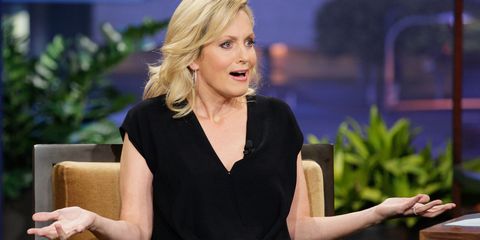 I'm not sure I would have made it through adolescence had social media existed in my rather desperate high school years. I body-shamed myself enough and didn't need the hormonally engorged boys to tell me that I was not f*ckable enough. And the bikini shots that plaster Instagram now? I wouldn't have stood a chance, Photoshop or not.

When I first started doing comedy, I realized it was way better than being pretty. I experienced that doing Christopher Durang's play The Marriage of Bette and Boo in high school. It was meant to be a dramatic tour de force; I was playing an introverted cellist. But in the beginning of the second act, I spread my legs wide to make room for the cello, and it was the most blatant sexual gesture, yet my face was completely nonplussed. The audience broke out in uproarious laughter. I remember the feeling perfectly, as if it's frozen in time, a rush of elation that rippled through my body—what I imagine it's like to walk on the moon, win an Olympic gold medal, have a real orgasm. It was better than being crowned prom queen.

From that night forward, I chose funny over pretty. In fact, I lost interest in trying to compete in the gorgeousness arena. Don't get me wrong, I didn't become The Revenant; I still exfoliated and used kelp shampoo. I just didn't put all my chips down on pretty.

"Sure, she looked amazing in a sheer bohemian dress and gladiator sandals, but when she pulled her chair up to the table, that was all there was, and I would watch the gazes that were initially so focused on her slowly turn away."

My first love was a 17-year-old, Harvard-bound James Spader (circa Pretty in Pink) look-alike. I was a slightly overweight teenager with thin hair and no fashion sense. (Unless you think Laura Ashley flannel turtleneck dresses with kneesocks and clogs is chic.) To spare you the banal details of our courtship: I got the guy. Not so much because I told the joke, but because I got the joke. I could make him laugh by the simple observations of our daily adolescent life. Oh, and I could act out all parts from Jesus Christ Superstar!

As I entered my 20s, I honed my comedic skills. I had a friend who was completely fixated with the exterior. She would use a safety pin to separate each lash after she applied mascara, ate celery by the bushel, and spent Friday nights watching TV in a face mask. As much as I was in awe of her laborious beauty routines, I knew it was ultimately vacuous. Not because a large percentage of her life was consumed with whether she had a blemish, but because no other facet of herself was ever developed. Sure, she looked amazing in a sheer bohemian dress and gladiator sandals, but when she pulled her chair up to the table, that was all there was, and I would watch the gazes that were initially so focused on her slowly turn away. Whereas I was initially met with pleasantries, it was my off-color stories that eventually attracted those gazes.

Now I am older and could use an hour a day on the treadmill. But as I witness my friends frantically SoulCycling and injecting, I am confident that my sense of humor will never lose its elasticity or require human growth hormone. It will always be my strength, my shield, my Kardashian ass. Beauty fades; a good rabbi joke never does. And if you ask me who I'd come back as in another life, either Brigitte Bardot or Phyllis Diller? Phyllis Diller all the way, baby!

This content is created and maintained by a third party, and imported onto this page to help users provide their email addresses. You may be able to find more information about this and similar content at piano.io
Advertisement - Continue Reading Below
More From Celebrity
Chrissy Teigen's Therapist Inspired Her New Hobby
J.Lo Claps Back After Botox Comments
Advertisement - Continue Reading Below
Katie Just Posed in a Shirt Her Boyfriend Designed
Meghan Wasn't Appreciated for Royal Contributions
Harry & Meghan Have Had a Painful Year Since Exit
The Queen's Hot Grandnephew Is a Thirst Trap
Watch Diana Play Impromptu Piano in Rare Clip
Peek Inside the Cambridges' Country Home
Harry Is Heartbroken About His Family Situation
William and Harry Could Fight Over Diana's Legacy