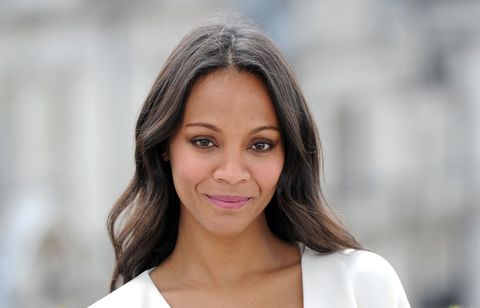 It's an indisputable fact that Hollywood is rooted in systemic racism and sexism. Women, and specifically women of color, don't make as much money, get as much screen time, or have as many jobs behind the scenes as their male counterparts.

Many actresses have commented on the gender and diversity gap in Hollywood, and Zoe Saldana revealed her thoughts on the issue—saying taking on sci-fi roles has allowed her to be both gender- and color-blind.

"It's been brought to my attention continuously since I was born that I'm not a conventional person because of the color of my skin or my gender or my cultural background," she said during a recent interview with The Daily Telegraph. "So I think science fiction has given me the ability as an artist to be color-blind, and gender-blind, and to imagine and reinvent myself and be the chameleon actors are supposed to be."

It should be noted that Saldana was criticized for her portrayal of Nina Simone, during which she was accused of wearing a prosthetic nose and darkened skin. The role caused social media backlash, including from the Simone estate:

.@zoesaldana Cool story but please take Nina's name out your mouth. For the rest of your life.