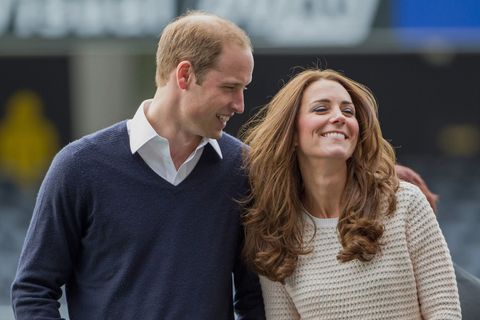 Royalty—they're just like you! No, but really. In a new, super candid interview with BBC's Radio 1, Prince William and Kate Middleton opened up about everything from their chill nights together to William's infamous dad dancing.

Turns out the pair love to order takeaway curry when they're home for the evening (it beat out pizza as their favorite food), and usually kick back to watch Game of Thrones or Homeland. So, yeah, you could double date with them—though there isn't actually a curry delivery guy with special access to Kensington Palace. "It doesn't usually get ordered to the Palace to be honest, normally someone goes and picks it up," William said, according to the Daily Mail.

Will also revealed that they lounge in "comfy clothes" (to quote: "I've got my comfy clothes, yes. I don't know if they're the same as what you wear though") and spoke about his dad dancing, saying he'd love to go to Glastonbury, but had already gotten "into enough trouble with my dancing recently."

BTW, if you're wondering why the notoriously private pair got so open with Radio 1, it's probably because William is a huge fan. He even texts in with requests and shoutouts (under an alias, of course) as he drives to work—which Kate called him out for by quipping "What were you doing texting in the car?"

Please keep doing interviews like this, Will and Kate.