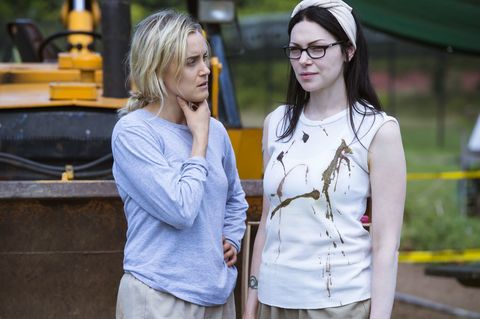 During a Tribeca Film Festival panel, the cast of Hulu's The Handmaid's Tale inexplicably stressed that the show isn't the feminist story we think it is. Which is massively disappointing, not to mention completely incorrect.

Margaret Atwood's book is a touchstone for feminism, and it—for lack of a more eloquent word—sucks that this was ever up for debate. We deserve to have something to call our own. And the show should support its target audience instead of distancing itself from them.

They needed an "only," an "also," and a human rights definition of the F word, imho.

But before The Handmaids Tale there was Orange Is the New Black, a show that's by women, about women, and for—well, everyone—but especially women. Women who are angry, scared, frustrated, and marginalized. I'm not shy about calling OITNB a feminist show, and for the most part, neither is the cast. So with the dismal Handmaid's Tale panel in mind, I asked OITNB cast members how they feel about their show being labeled feminist. For the most part, they're fine with it.

"We don't separate feminism from transgender rights, from the LBGT community, from the issues of poverty and how socio-economic status impacts women, race, or gender identity." — Taylor Schilling

Taylor Schilling (Piper): "One of the things I like about this show being labeled feminist is that it really embodies the idea of intersectionality. We don't separate feminism from transgender rights, from the LBGT community, from the issues of poverty and how socio-economic status impacts women, race, or gender identity. The show embodies everything that makes feminism what it is today, as opposed to what it was fifty years ago."

Natasha Lyonne (Nichols): "We're proud of it. We believe in it. Jenji Kohan couldn't do anything but be brilliant and create shows that are great mirrors of society, so we all follow suit. That in and of itself feels very powerful."

Diane Guerrero (Maritza Ramos): "The show itself has only enhanced my personal perception of feminism, and who I am in that context. I am a feminist. I have been a feminist. I'm stepping into my power as a woman, and as a woman of color. The show has solidified those thoughts and feelings, and helped me shape my political view. I used to be afraid to talk about politics at a dinner party. Being on this show, it's like this is what we are. We are a show about political and social commentary."

Adrienne Moore (Cindy): "I think it's a show that has so many colors. It's definitely highlighting feminism, but the show is so popular and so succesful because everyone can see something about themselves in these characters. That's how I choose to look at it. As something that really shows a slice of life in the world. I feel like feminism isn't one of the main core topics *all* the time.... The show touches on a larger scope than feminism." 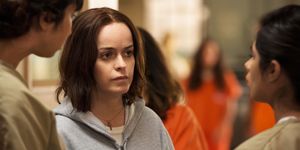 Danielle Brooks (Taystee): "I hear what Adrienne is saying with feminism. But the crazy thing about Jenji Kohan is while she never predicts what's happening in the country, there are so many parallels. It's been quite empowering to see how much women can do—which we already knew, but the show highlights the fact that regardless of if you think you have nothing to offer, or don't have a voice as a woman, you do."

Jackie Cruz (Marisol Gonzales): "Jenji is a girl boss. No, not a girl boss. A boss. Not even a boss lady. Just a boss. And this show is representing all women."