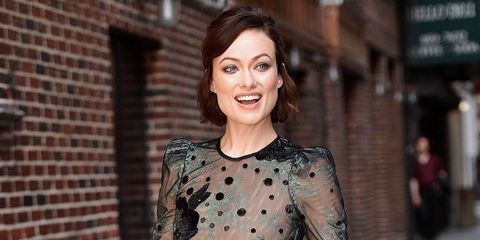 Olivia Wilde's new play, an adaptation of George Orwell's 1984, has been getting a lot of publicity. According to The Hollywood Reporter, throughout the play's previews, audience members have been known to faint, throw up, scream, and get into fights. So why are members of the public having such a strong reaction to the material?

Of the extreme reactions, Wilde said, "I'm not surprised, since this experience is unique, bold and immersive. It allows you to empathize in a visceral way, and that means making the audience physically and emotionally uncomfortable." Clearly, the play is having the desired effect on patrons, then.

In fact, Wilde hopes that 1984 will make audiences consider the current political climate. She said, "I hope this show makes people question everything they're being told. All we're saying is, the truth matters."

Director Robert Icke supported Wilde's viewpoint, and said, "You can stay and watch or you can leave—that's a perfectly fine reaction to watching someone be tortured. But if this show is the most upsetting part of anyone's day, they're not reading the news headlines. Things are much worse than a piece of theater getting under your skin a little bit."

While not for the squeamish, 1984 has been getting great reviews, with Variety claiming it's "worth the cost of losing your lunch." Wow.

After all, we live in terrifying times, in which reality is often scarier than fiction. The Broadway show is just hoping to highlight some of the injustices happening in the world right now.