Before he was married to Kim Kardashian, Kanye West dated feminist model Amber Rose—and their breakup was extremely rough on her. Rose hasn't spoken much about their highly publicized split, but West has—and he's been less than kind. Among the many insults he's thrown Rose's way, Kanye's said he "had to take 30 showers" after dating her, insulted her child, and insulted her profession as a former stripper. 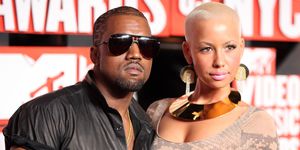 "I have never cheated on any of my boyfriends," Rose said during a recent interview with Complex. "I still have never said anything mean about Kanye. This is after six, seven years of constant bullying from him."

When it comes to West's album My Beautiful Dark Twisted Fantasy being inspired by the breakup—Rose was quick to point out the hypocrisy: "It's a great part of history and it's a great part of hip-hop, and I'm happy to be a part of it, but that time was not a great time for me. I'm famous, and I'm broke. I can't date anyone else. I can't say anything on the internet because Kanye has such a voice. If I was going to kill myself, I would have done it during those times. The only thing I got from him was fame. I had to just take that. I had to take that heartbreak on top of it."

The former couple's feud seems to have settled down more recently, with Rose giving him a smile and a shrug when he shouted her out at the VMAs.