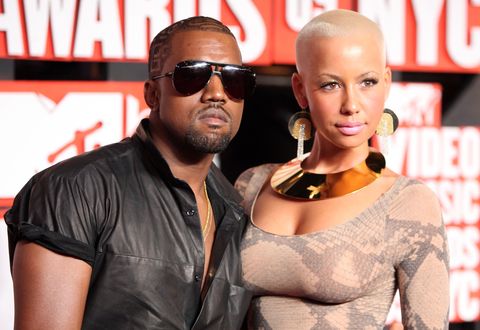 Just when we thought the world had finally moved on from the drama surrounding Kanye West's "Famous," a new demo has found its way online, and um, the lyrics are...different. Most notably, there's a new addition to the track—Kanye's ex-girlfriend, Amber Rose, who he seems to think owes him sex.

"I feel like Amber Rose still owe me sex," Kanye raps. "Why? I made that bitch famous. Not really, but somewhat famous."

Okay, so obviously no woman has ever owed a man sex in the history of the world since that's not how life should ever work, so it's easy to see why Kanye removed the lyric. However, it should be noted that his infamous Taylor Swift reference had a similar spin—with Kanye rapping "I feel like Taylor Swift still owe me sex, I made that bitch famous."

It's unclear whether Kanye recorded this demo before or after he got Taylor Swift on the phone to approve the song (note: she didn't approve him calling her a "bitch"), but the subject of owing sex definitely wasn't brought up during their call.

"Where is the video of Kanye telling me he was going to call me 'that bitch' in his song? It doesn't exist because it never happened," Taylor wrote on Instagram after Kim Kardashian leaked their conversation. "Being falsely painted as a liar when I was never given the full story or played any part of the song is character assassination."

Mehera Bonner Contributor Mehera Bonner is a news writer who focuses on celebrities and royals.
This content is created and maintained by a third party, and imported onto this page to help users provide their email addresses. You may be able to find more information about this and similar content at piano.io
Advertisement - Continue Reading Below
More From Celebrity
Blake Lively Wears a Pink Sequin Dress
Meghan Markle Hangs Out With Melissa McCarthy
Advertisement - Continue Reading Below
Simone's Boyfriend Sent Her the Sweetest Message
What Happens on Katie's Season?
Rebel Wilson Recreated This Britney Spears Look
Jennifer Lopez Flew Back From European Getaway
Jennifer Lopez Wears Old Bracelet From Ben Affleck
Simone Biles Cheers on MyKayla Skinner
See the Royals Socialize at a 1991 Cocktail Party
Eugenie Posts Pics from Harry & Meghan's Home